2016 Trends and Developments in Executive Compensation

The landscape of executive compensation and corporate governance is constantly evolving. Each year, Meridian identifies key developments regarding how companies respond to these ever changing conditions. (Read last year’s survey here.) Meridian’s 2016 Trends and Developments in Executive Compensation Survey features responses from 143 major companies across a diverse range of industries. This survey and its results are intended to provide an overview of the current environment and signal the direction in which companies are moving when it comes to executive compensation and corporate governance practices. Our latest installment offers a fresh look at market trends and developments with key insights into current hot topics, such as: clawback provisions, planning for required CEO pay ratios, and reactions to commodity price changes and market volatility.

Highlights and key findings of the survey include:

Nearly 65% of responding companies indicated that they directly engaged with institutional shareholders and/or proxy advisory firms (e.g., ISS and Glass Lewis) in preparation of their Say on Pay vote.

Merit increases were modest for CEOs, executives and non-executives alike (median of approximately 3%), a trend that is consistent with recent years and a low inflation environment. However, relative to last year’s results, a greater number of participating organizations have decided to hold salaries flat for 2016, which reflects a combination of company performance and macroeconomic trends, especially in the energy sector. Note, some of these companies may freeze salaries or defer the merit increase process until later in 2016 when financial projections are more certain.

Relative to last year, responding companies are considering more factors in the goal-setting process (e.g., sharing ratios, company and peer historical performance, etc.). Additionally, approximately 29% of responding companies adjusted 2015 annual incentive payouts to take into account extraordinary, unusual or unplanned events (other than for tax deductibility reasons). This is particularly true for companies exposed to commodity prices, with approximately one-half of the adjustments made by companies in the industrial and energy sectors.

For 2016, participants generally maintained 2015 long-term incentive (LTI) grant values (46% of respondents) or increased grant values modestly (43% of respondents). Only 11% reported a reduction in 2016 equity grant values as a response to recent substantial changes in commodity prices, market volatility, economic uncertainty, run rate pressures, etc., with one-half of these reductions made by companies in the energy sector. 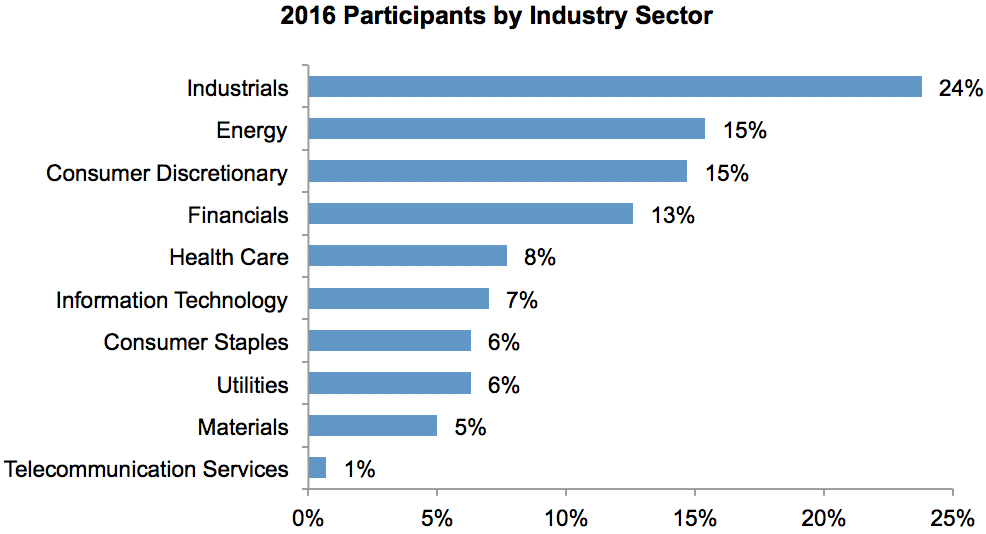 Now in the sixth year of Say on Pay, companies have had ample time to establish sound pay program designs. Accordingly, shareholder support of executive pay programs remains very high, most often with over 90% voting in favor of such proposals.

Steps Taken to Prepare for 2016 Say on Pay Vote

Despite consistently high levels of shareholder support on Say on Pay, a significant number of companies directly engage with institutional shareholders and/or proxy advisory firms (i.e., ISS and Glass Lewis) in preparation of the Say on Pay vote. Further, companies continue to improve the quality of their Compensation Discussion and Analysis (CD&A) through the use of executive summaries, tables, charts and graphs. While many of these supplemental disclosures exceed proxy disclosure requirements, they are a useful tool to better communicate overall pay program design and performance alignment to shareholders. Consistent with last year, however, we are not seeing wholesale changes to executive pay designs.

Note: Total exceeds 100% as many companies use multiple approaches.

Institutional Shareholder Services (ISS) continues to wield significant influence over Say on Pay vote results (Glass Lewis also has an impact, although to a much lesser extent). Early returns from the 2016 proxy season indicate that an “Against” recommendation from ISS results in, on average, a 25%-30% decrease in shareholder support, despite major institutions developing their own review models. In preparation of an ISS evaluation, the most common step taken (64%) is to engage an outside compensation consultant to replicate the ISS quantitative test outcome. ISS did not make any major changes to its three-part quantitative pay-for-performance test for the 2016 proxy season.

Note: Total exceeds 100% as some companies use multiple approaches.

This section is new to our survey in 2016 and highlights key developments of Dodd-Frank mandated pay disclosures. With the SEC adopting the final rule on the CEO Pay Ratio on August 5, 2015 and an expected final ruling on Mandatory Clawback in 2016, we surveyed companies on the steps they are taking to prepare for these mandated disclosures.

Due to external pressures from institutional shareholders and proxy advisors, many companies have adopted formal clawback policies in recent years. Among responding companies, nearly 40% of these provisions are already compliant with the SEC’s proposed rules.

The SEC adopted the final rule on the CEO Pay Ratio in August of 2015. The initial CEO Pay Ratio will relate to the first reporting period beginning on or after January 1, 2017 (i.e., 2018 proxy) and will cover compensation for fiscal year 2017. While disclosure is not yet mandatory, approximately 40% of participating companies have either calculated the ratio or have begun the process of calculating the ratio (e.g., attempting to identify the median employee).

2016 merit budget increases for CEOs and executives have remained relatively consistent for several years at approximately 3% (slightly above U.S. inflation rates). Merit budgets outside the U.S. vary greatly, often related to local inflationary trends. This continues a long-term trend of merit increases between 2.5% and 3.5%. However, relative to last year, a larger portion of participants reported holding salaries flat (i.e., 0% merit increase) for 2016. This reflects a combination of individual company performance and macroeconomic trends. Note, some of these companies may freeze salaries or defer the merit increase process until later in 2016 when financial projections are more certain.

Approximately 57% of responding companies indicated that their annual incentive payouts for 2015 performance were at or above target.

Approximately 29% of responding companies adjusted 2015 results to take into account extraordinary, unusual or unplanned events (other than for tax deductibility reasons), with approximately half of the adjustments made by companies in the industrial and energy sectors.

The chart below details the prevalence of performance metrics used by companies for determining annual incentive payouts. As expected, profit measures (e.g., operating income and EPS) remain the most common. Note, many metrics are industry specific, and some are unique to individual companies. 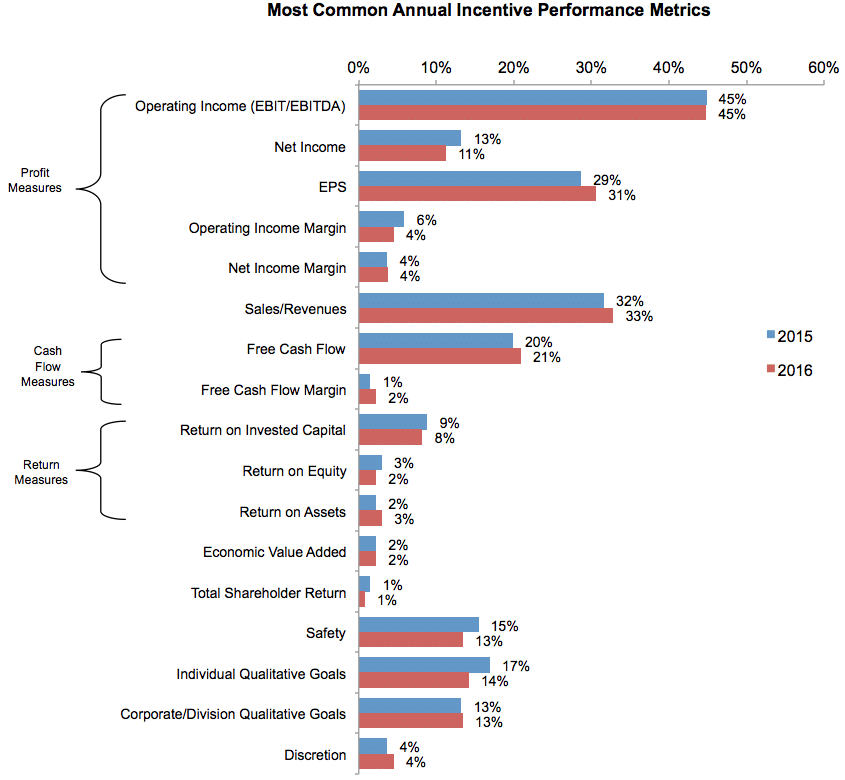 A majority of companies (55%) set their annual incentive performance goals higher in 2016 than in 2015, indicating increased expectations as the broader economy continues its recovery.

With recent fluctuations in currency exchange rates, many organizations were faced with the decision of whether to adjust performance results to “normalize” the impact on incentive plans. As seen below, most consider fluctuations in currency as a “cost of doing business” on a global scale and expect management to take actions to reduce this exposure, and, therefore, did not adjust payouts for this issue.

Consistent with prior years, annual budget/plan and historical results are the two most commonly reported factors evaluated when setting annual goals. Interestingly, the prevalence of most factors increased, with an average increase of 5.6% per factor (others remained relatively flat). This indicates that, overall, companies may be considering more factors when setting annual goals. Historical performance, external guidance and sharing ratios saw the biggest increase in prevalence from last year’s results. Note, data on sharing ratios is limited and varies due to a number of company-specific factors, including eligibility levels for annual incentive plans. Nonetheless, an internal understanding of the relationship between the annual incentive plan and how dollars are allocated between executives and shareholders (especially between target and maximum payout levels) is an increasingly important aspect of the annual goal-setting process.

Note: Total exceeds 100% as many companies use multiple approaches.

Most reporting organizations determine LTI grant size using a fixed economic value approach; however, using a fixed multiple of salary is still a prevalent practice. Consistent with recent market trends, granting a fixed number of shares (regardless of share price) is a small minority practice as it can result in large swings of grant date value between years.

Fixed Economic Value: $100,000 and adjust the number of shares/units to reflect changes in stock price

Fixed Multiple of Salary: Value equal to 150% of base salary and adjust the number of shares/units to reflect changes in stock price

Unlike last year where the majority of companies (61%) made grants similar in value to the prior year, practice is more evenly split between an equal or greater target value in 2016. Among the 43% of companies that increased LTI values, the average increase was approximately 13%.

Given the recent substantial changes in commodity prices, market volatility, economic uncertainty, etc., many organizations were faced with the decision of whether to modify (in most cases, to decrease) 2016 equity grant values. Reasons for potential modifications include limited availability of shares (e.g., given the decrease in share prices in early 2016, maintaining prior equity grant date values would require a greater number of shares) and preventing a potential “windfall” to executives if/when share prices recover, among others. The impact of these market changes affect certain industries (especially the energy sector) more than others, however, the vast majority of responding companies did not make modifications to 2016 equity grants.

Among organizations that modified 2016 equity awards, the method of modification varied greatly. However, the majority reduced opportunities and/or put a cap on shares. Note, slightly more than half of these modifications were made by companies in the industrial and energy sectors.

The majority of companies grant annual equity awards on the day of the Committee meeting, however, the decision of when to grant equity is a company-specific decision that depends on a variety of factors.

Performance-based stock/unit awards continue to be the most prevalent LTI vehicle. In the table below, the prevalence column represents the percentage of responding companies that grant a particular mix of LTI vehicles. The percentages listed under each vehicle heading represent the dollar weighting of that vehicle of the total LTI opportunity. Overall, the average weighting of LTI vehicles for reporting companies in 2016 is consistent with average weightings in 2015.

Note: Total exceeds 100% as some companies use multiple approaches.

For reporting companies granting performance-based awards, the vast majority (71%) measure performance relative to an external benchmark for some portion of their performance grant. Approximately 90% of these relative plans are measured based on TSR.

Note: For companies utilizing relative metrics, on average, the relative component accounts for approximately 80% of the total award value.

TSR remains the most common long-term performance plan metric due to its transparency, alignment with shareholders and because it eliminates the need to set goals each year. Of the companies using TSR, roughly 53% use one or more additional metrics in their long-term performance plan (earnings-related measures (most often EPS), return metrics (most often ROIC), and revenue are the most prevalent supplemental metrics to TSR). 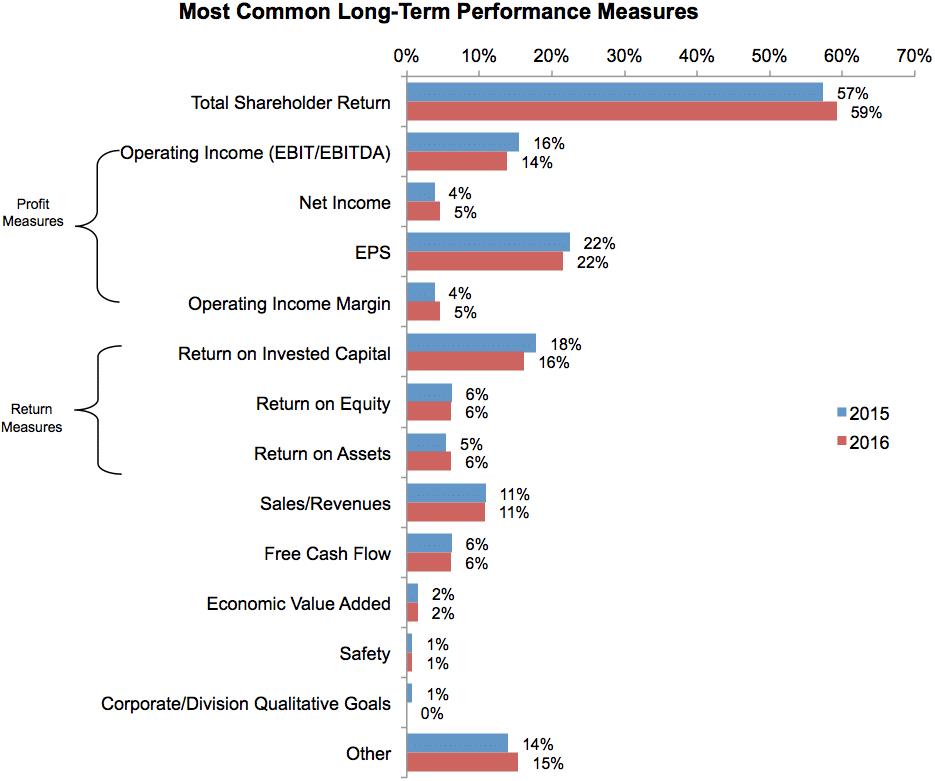 Please email Mike Rourke (mrourke@meridiancp.com) or call 313-309-2090 with any questions or comments.