Posted by Donald Kalfen on January 28, 2022 in Surveys

Meridian’s 2021 Study of Executive Severance Arrangements Not Related to a Change in Control (“Study”) provides current information and data on severance practices, not in the context of a change in control, at 100 large U.S. public companies (“Study Group”). Each of the 100 companies in the Study (“Study Group”) was a component company of the Standard & Poor’s 500® Index¹ (“S&P 500®”) as of December 31, 2020.

We derived data and information for the Study primarily from Main Data Group and our separate review of annual shareholder proxies filed with the Securities and Exchange Commission by Study Group companies. Throughout this Study, we reference data according to the fiscal year covered by the proxy statement, not according to the year in which the proxy statement was filed with the SEC.

The Study Group companies cover each major industrial sector of the S&P 500®. The median revenues and market capitalization of the Study Group and S&P 500® are compared in the table below.

The Study provides prevalence data on the following aspects of executive severance arrangements that cover named executive officers² (“NEOs”): (i) payment triggers, (ii) cash severance benefits, (iii) stub year annual bonus, (iv) continuation of health care benefits and (v) treatment of long-term incentive awards. However, the Study does not take into account benefits that may be payable to an NEO upon death, disability or retirement, or capture potential enhancements that may be negotiated upon actual termination.

Executive severance arrangements refer to any arrangement that provides benefits to an NEO upon a qualifying termination of employment that is not related to or contingent upon a change in control of the enterprise.

There are important business rationales for maintaining executive severance arrangements, which include the following:

• Providing a competitive component of compensation,

• Retaining executives through turbulent times, and

• Continuation of health care benefits, and

Restricted Covenants and Release and Waivers of Claims

Often, the payment of severance benefits is conditioned upon an executive’s adherence to restrictive covenants and/or execution of a comprehensive release and waiver of claims. Restrictive covenants may include non-compete, non-solicitation, non-disclosure and non-disparagement provisions. Releases and waivers typically prohibit a departing executive from bringing a lawsuit against the former employer for employment-related causes of actions, including actions under the Age Discrimination in Employment Act.

85% of companies determined the amount of cash severance based on a fixed multiple of “pay”.

• Definition of Pay – The majority practice is to define pay as the sum of base salary and bonus (with bonus typically defined as current year target bonus).

• Cash Severance Based on a Fixed Multiple of Pay – The dominant severance multiple for CEOs and other NEOs was 2.0x (62% and 40% of companies, respectively).

61% of companies that maintained executive severance arrangements paid stub-year bonuses on a pro rata basis (typically based on target).

Executive severance arrangements are a widespread practice among the Study Group. These arrangements provide cash severance and frequently other benefits, including the acceleration of vesting of long-term incentive awards in connection with an NEO’s qualifying termination. 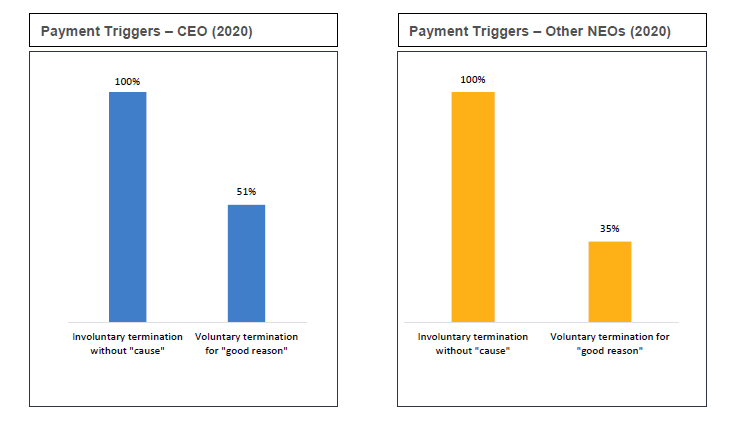 The effect of a qualifying termination on non-vested long-term incentive awards is discussed separately in this Study (see pages 11-13).

69% of the Study Group disclosed severance arrangements that provide cash severance to one or more NEOs upon a qualifying termination. Of these companies, 85% determine the amount of cash severance
based on a fixed multiple of an NEO’s compensation. The table below shows the different methods used for determining cash severance benefits. 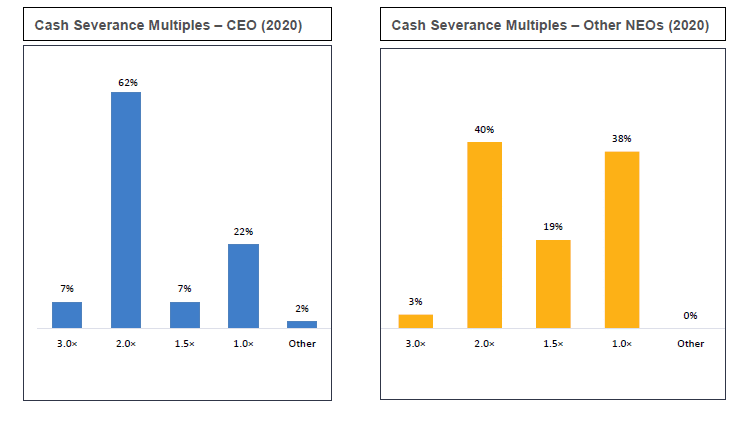 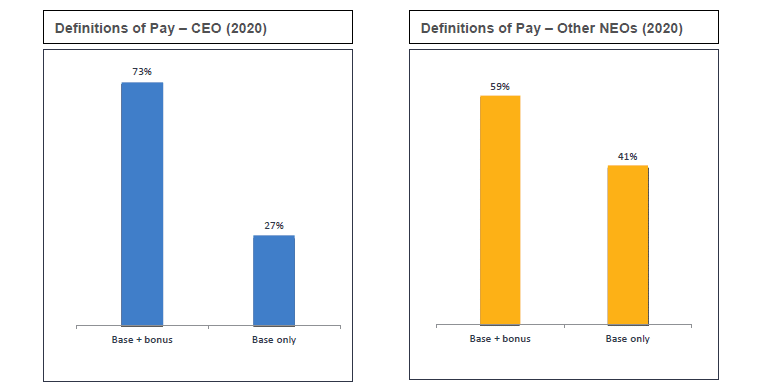 When a severance formula includes an NEO’s bonus, typically the definition of bonus refers to target bonus (71% prevalence). To a significantly lesser extent (23% prevalence), the definition is based on the bonus actually earned by the NEO (e.g., prior year’s actual bonus, multi-year average). 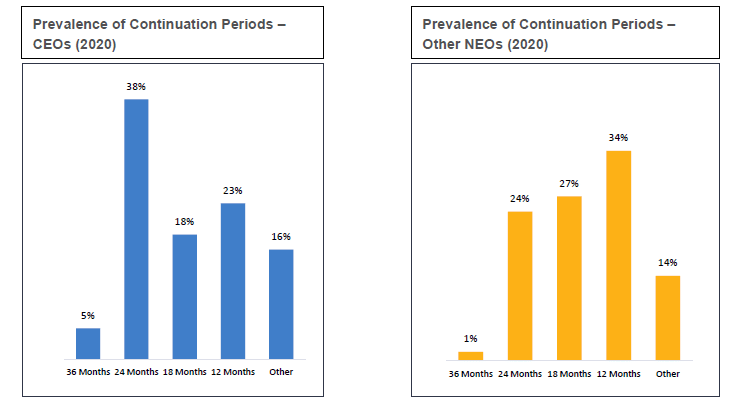 This section of the Study examines the effect of a qualifying termination on the following types of long-term incentive awards:

Effect of a Qualifying Termination on Long-Term Incentive Awards

A majority of the Study Group companies disclosed that non-vested stock options are forfeited upon a qualifying termination for CEOs and other NEOs. 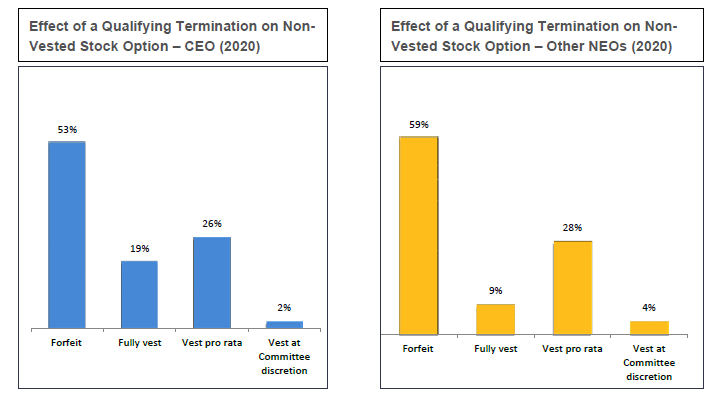 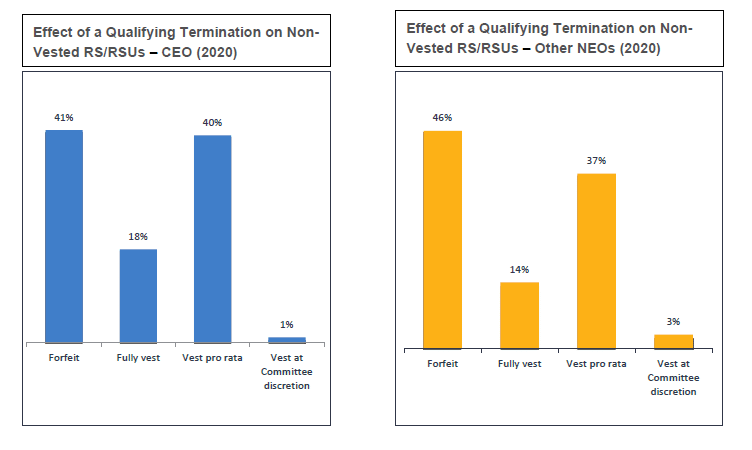 Unlike options and restricted stock/RSUs, the most dominant practice is to pro rata vest performance shares upon a qualifying termination, with forfeiture the next most prevalent practice. 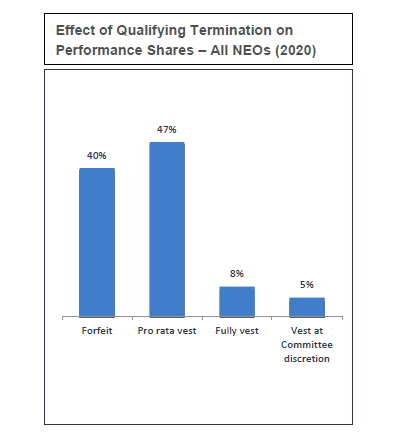 In cases where performance shares fully or pro rata vest in connection with a qualifying termination, the number of shares that vest is most commonly determined based on actual performance (81%). 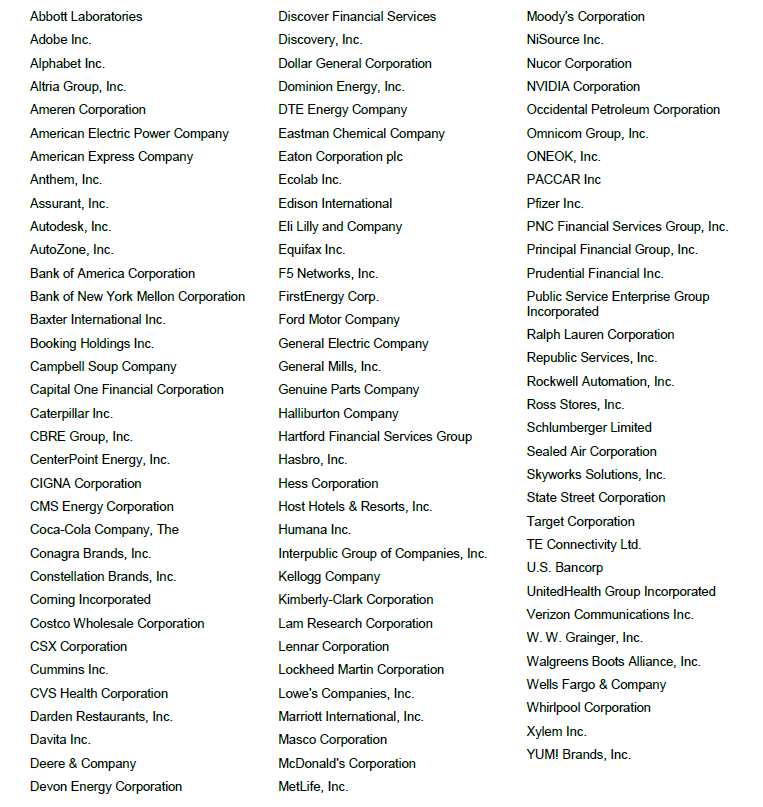 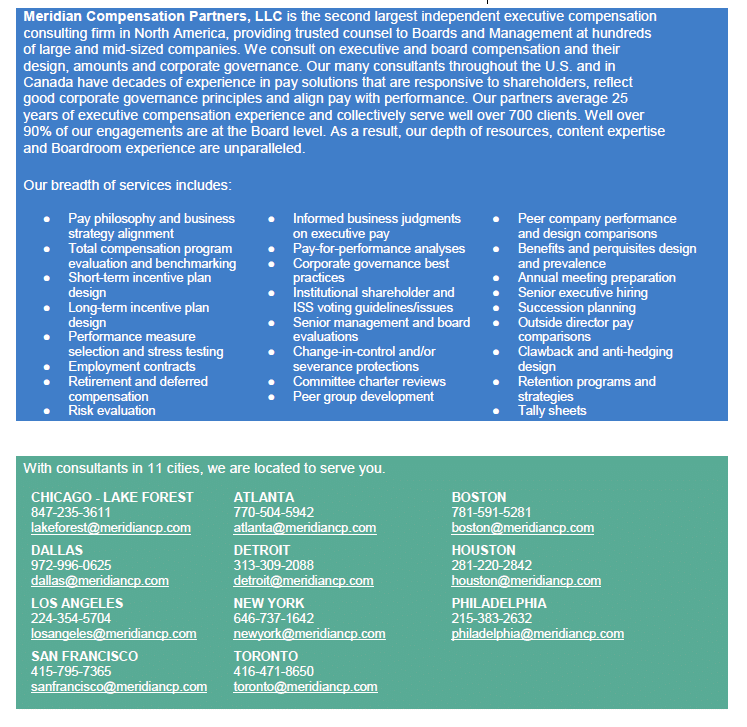 Donald Kalfen, a partner of Meridian Compensation Partners, LLC is the principal author of this Study. Other partners and consultants of the firm assisted in the preparation of the Study. Questions and comments regarding the Study should be directed to Mr. Kalfen at dkalfen@meridiancp.com or (847) 235-3605.