Posted by Donald Kalfen on June 21, 2022 in Client Alerts

On May 24, 2022, the Delaware Chancery Court denied a motion to dismiss a shareholder lawsuit that alleges a company’s Compensation Committee breached their fiduciary duties by granting the CEO performance awards that could exceed the individual annual award limit under the company’s equity plan.

The Chancery Court did not decide the lawsuit on its merits. 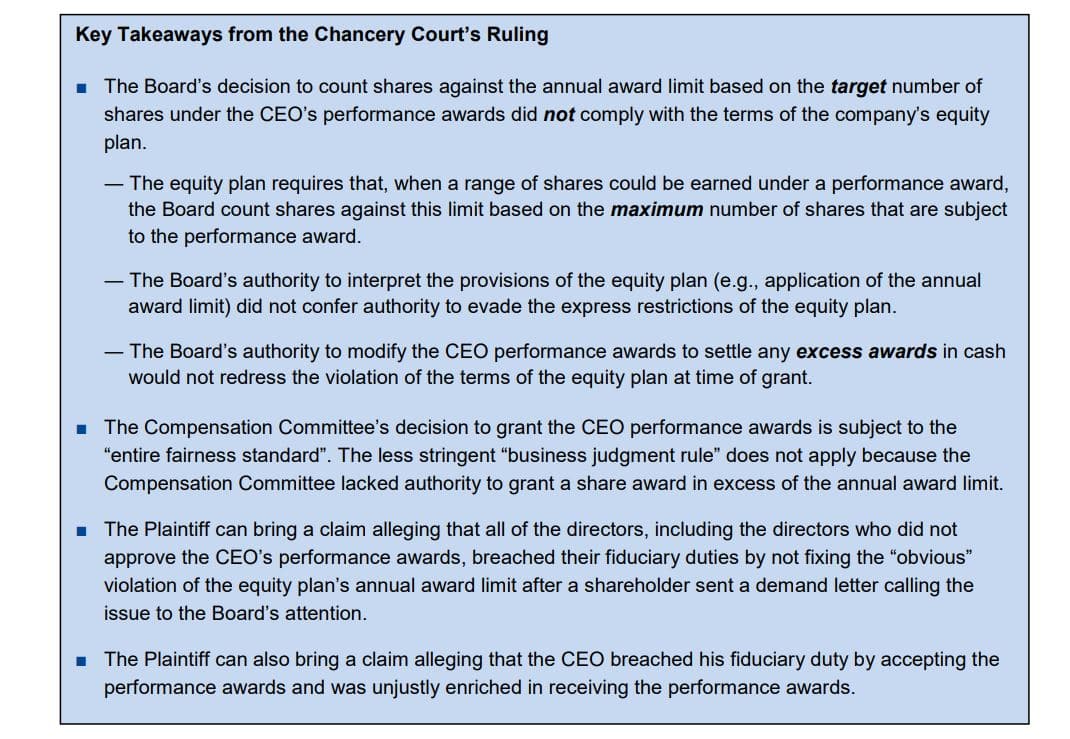 The ODP Corporation (“Company”) maintains a shareholder approved equity plan (“Equity Plan”) under which the Company’s board of directors may grant certain types of equity awards to employees, non-employee directors and consultants. The Equity Plan limits the maximum number of shares of common stock that may be subject to performance awards granted in any one fiscal year to any one Equity Plan participant to 3.5 million shares (“Annual Award Limit”).

Under certain payout scenarios, the Challenged Awards would give Mr. Smith the right to receive shares in excess of the Annual Award Limit.

Robert Garfield, a shareholder of the Company, sent a demand letter dated March 18, 2021 to the Company’s Board of Directors under which Mr. Garfield asked the Board to “[m]odify the performance awards granted to Mr. Smith by lowering the maximum potential payout to conform with the [Annual Award Limit].” The demand letter also asked the Board to “[i]nvestigate whether there are additional violations of the Company’s equity plans” and to “[a]dopt and implement internal controls and systems at the Company . . . to prohibit and prevent a recurrence of the [Equity] Plan violation . . . and ensure compliance with NASDAQ rules and regulations.”

By letter dated April 9, 2021, the Company informed Mr. Garfield that it had refused to take any action in response to the demand letter. The Company represented that the Board had adopted a policy to determine compliance with the Annual Award Limit based on the target number of shares subject to a performance award. Applying this policy, the Company asserted that the Challenged Awards would not exceed the Annual Award Limit. The Company further claimed that the Board had the authority to adopt this policy “pursuant to the broad interpretative authority found in [the Equity] Plan.”

In May 2021, Mr. Garfield (“Plaintiff”) filed a complaint in the Delaware Chancery Court that alleged:

■ Breach of contract by (i) the four members of the Company’s Compensation Committee who approved the Challenged Awards because the awards violated the terms of the 2019 Plan and (ii) by all of the directors serving on the Board who rejected the Demand Letter by allowing Mr. Smith to retain his rights under the Challenged Awards.

■ Unjust enrichment by Mr. Smith for the personal benefit he received under the Challenged Awards.

Meridian comment. In response to the Chancery Court’s ruling, companies should review:

■ Their equity plans’ individual annual award limits (many companies no longer include such limits in their equity plans since Section 162(m) of the Internal Revenue Code was modified by the Tax Cuts and Jobs Act of 2017).

■ Any large outstanding performance awards (alone or in combination with other grants) to determine whether such grants may exceed a stated individual award limit in the equity plan across a range of potential payout scenarios.