Posted by Andrew Stancel on September 11, 2015 in Thought Leadership

Director total compensation increased year over year, while equity held steady at just under one-half of director pay. This aligns with increases in director time commitments and expansion of the role of board members. Directors of Canadian companies continue to be paid less than their American peers, even without any adjustment for currency. 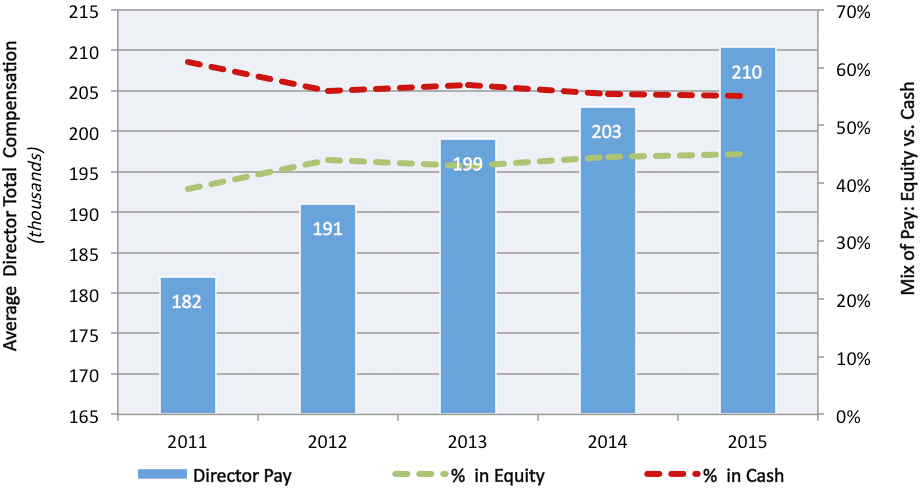 The proportion of total compensation delivered in equity remained flat, at about 45% with deferred share units (DSUs) being the most prevalent equity vehicle for larger Canadian companies. We expect that the equity portion will rise to at least 50% of director compensation in the near term.

The pace of change to an all-inclusive retainer accelerated in Canada and we expect this to continue. Less than half (48%) of the S&P/TSX 60 companies paid per- meeting fees in 2014, down from 65% the year before.

According to a report published by the NACD, the average Director’s annual time commitment increased significantly over the past several years, reaching 309 hours per year among large cap companies surveyed by the association.

On average, the largest proportion of a Director’s time is spent attending board or committee meetings, followed by reviewing reports and other materials. A significant amount of the average directors’ time is spent on travel to/from board events, meeting informally with management, on director education, and representing the company at public events. Anecdotally, we see the same trends in Canada.

Meridian compared outside director compensation practices at the S&P/TSX 60 index companies with 228 comparably sized U.S. companies (based on revenue and market cap). The bottom line is that U.S. companies pay their directors about 20% more, with a greater portion in equity and generally in the form of an all-inclusive retainer. For study purposes, amounts are shown at their absolute dollar value, regardless of currency (no conversion has been applied); the 20% pay disparity is further exacerbated by the recent decrease in the Canadian dollar relative to the USD.