Posted by David Bixby and Eddie Capistran on June 16, 2020 in Client Alerts

Average support for Say on Pay in 2020 for oil and gas companies continues to be lower than for both general industry (Russell 3000). However, in 2020 we have seen a shift in the distribution of support within the oil & gas industry. This slightly more oil & gas companies have been able to exceed the important 80% threshold for avoiding further advisory firm scrutiny, but a significantly smaller percent energy companies received support of 90% or more. As shown in the charts below, while the distribution of support across general industry has remained fairly consistent over recent years, the percent of oil and gas companies receiving support of 90% or more has dropped from 69% in 2019 to 61% this year. 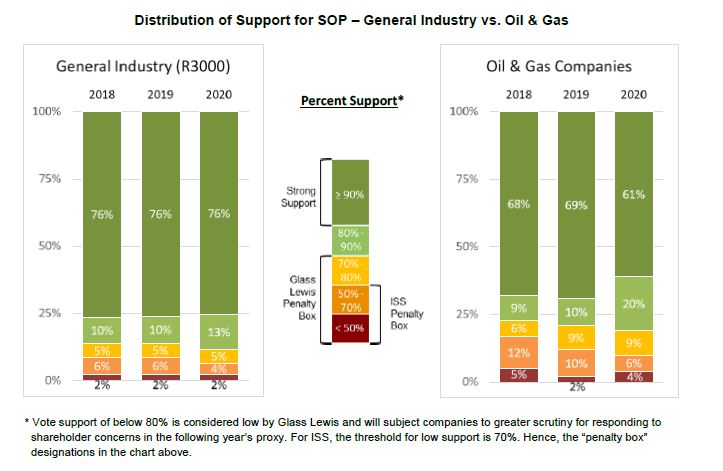 This outcome may not be surprising for a variety of reasons. Despite slightly better overall TSR performance during 2019, year-end stock prices in the industry were still well below where they were at the end of 2014 and industry pay practices remain the subject of significant criticism. The sharp decline in stock price for the sector as a whole since the beginning of 2020 surely did not help either.

Opposition from ISS Has Declined in 2020

Reduced opposition notwithstanding, the impact of an ISS “Against” remains significant in 2020. As in prior years, an ISS “Against” recommendation this year has resulted in an average reduction of roughly 30 percentage points versus a “For” recommendation for all companies in the Russell 3000. For oil & gas companies, the disparity has been more pronounced, with “Against” companies experiencing an average decline in support of 35 percentage points.

Refining and marketing companies have once again fared much better on average than companies in other sectors of oil & gas this year. The refining subsector had a second straight year with no “Against” recommendations and was the only subsector to have average support above 90%.

On average Drilling companies appear to have faced the greatest headwinds this year, although as of June 1, 2020 only three drillers had disclosed Say on Pay vote results.

Rationale for Negative Recommendations Remain Consistent with Prior Years

An apparent pay-for-performance disconnect in one of three primary ISS quantitative tests remains by far the most common trigger for ISS concern, although additional qualitative concerns are typically cited as the ultimate rationale for any negative recommendation. Qualitative concerns expressed in 2020, which are largely consistent with those we have seen in prior years, include:
▪ Large one-time or “special” awards particularly those without any forward-looking performance criteria attached
▪ Termination-related payments or compensation enhancements, particularly for apparently voluntary terminations like resignations or (less common) retirement
▪ Insufficient disclosure of incentive plan goals (forward-looking and backward-looking)
▪ Lack of sufficiently rigorous goals in short or long-term incentive plan (e.g., lower target performance level from prior year without corresponding reduction in incentive opportunity, or the ability to earn a target payout for median performance)
▪ Lack of a cap on relative TSR payouts if absolute TSR is negative
▪ Short-term performance periods within a long-term incentive plan
▪ Significant pay increases without “clearly disclosed” rationale
▪ Problematic practices like a modified single trigger in a new employment contract, excessive perks, and tax gross-ups.

Notably, there were several companies with negative recommendations this year whose response to a low 2019 vote was deemed sufficient to avoid recommendations against individual directors, but not responsive enough to ISS concerns to avoid a second straight “Against” recommendation for Say on Pay. Issuers who have been focused on addressing concerns expressed by their shareholders as opposed to those specifically highlighted by ISS may decide, based upon this experience, that both shareholder responsiveness and “ISS responsiveness” are required if another “For” recommendation is desired.

Check back here soon for some of our observations on what this all means for companies who are already starting to think about their 2021 vote.