Specifically, this report will cover the following areas:

Highlights of Vote Results on Select Shareholder Proposals (through May 16, 2017) 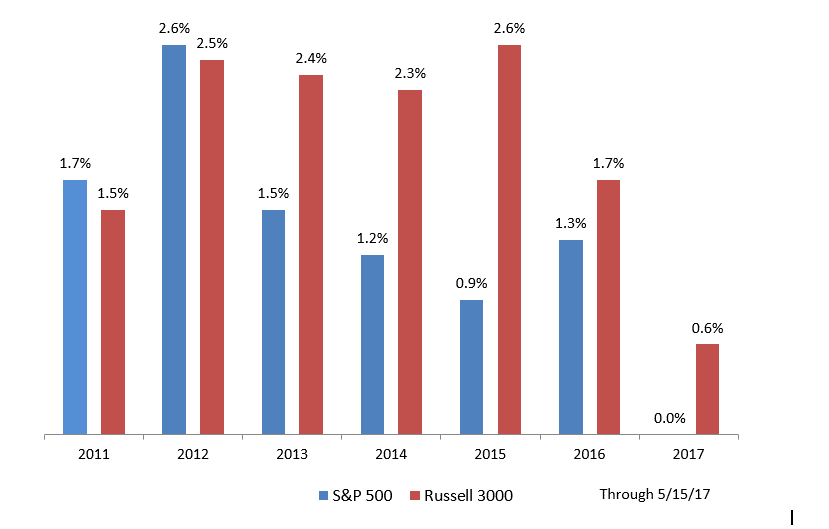 These multi-year trends in high passing rates at both S&P 500 companies and Russell 3000 companies strongly suggest that that these companies have been effectively addressing pay and governance concerns raised by shareholders and proxy advisors. 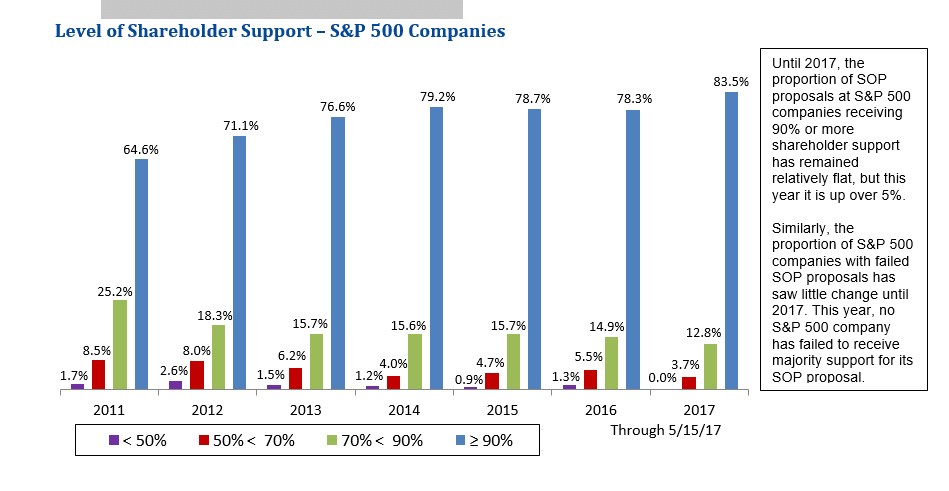 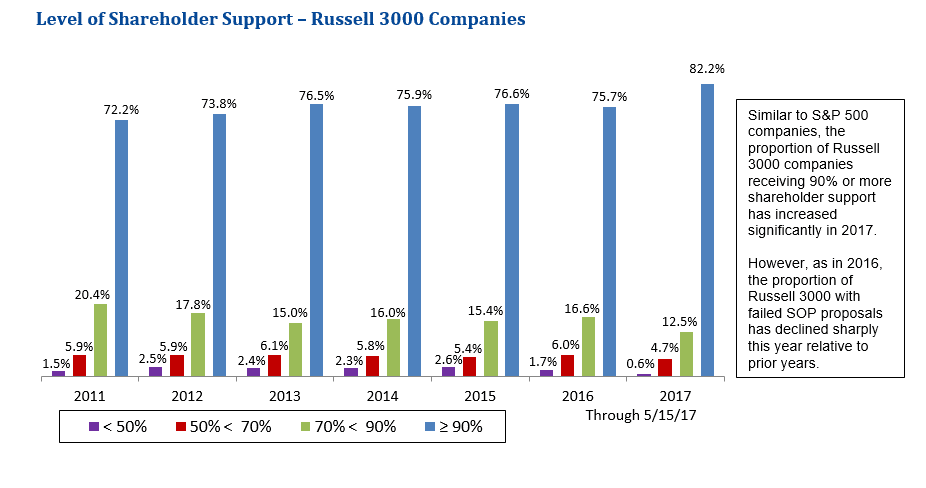 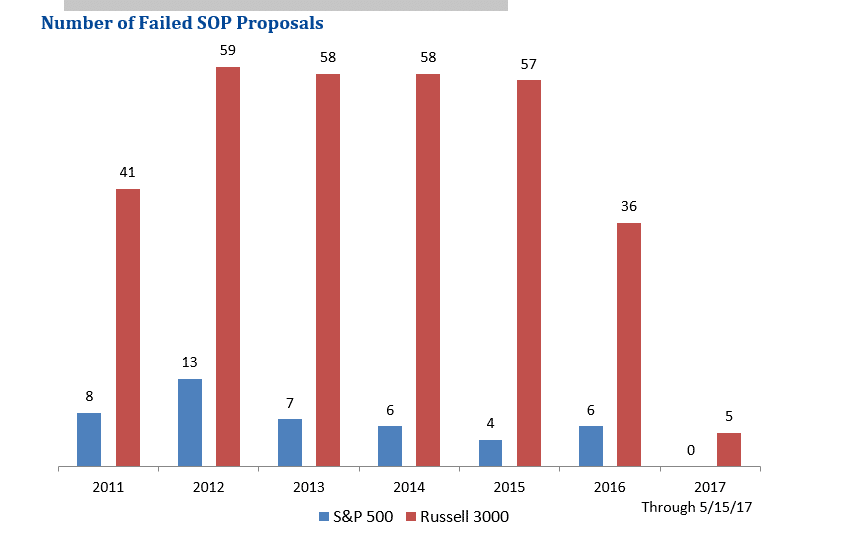 Contributing Reasons for Failed SOP Outcomes (Based on ISS Commentary) 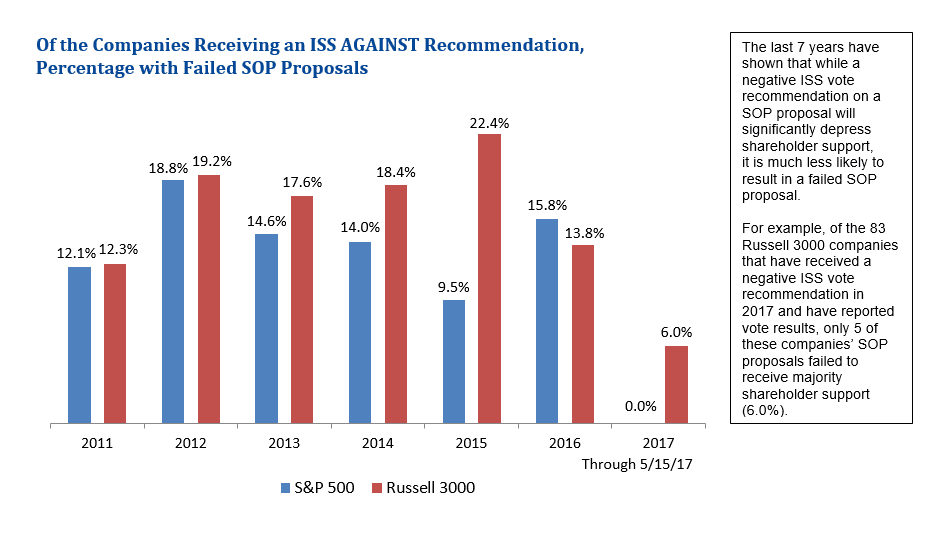 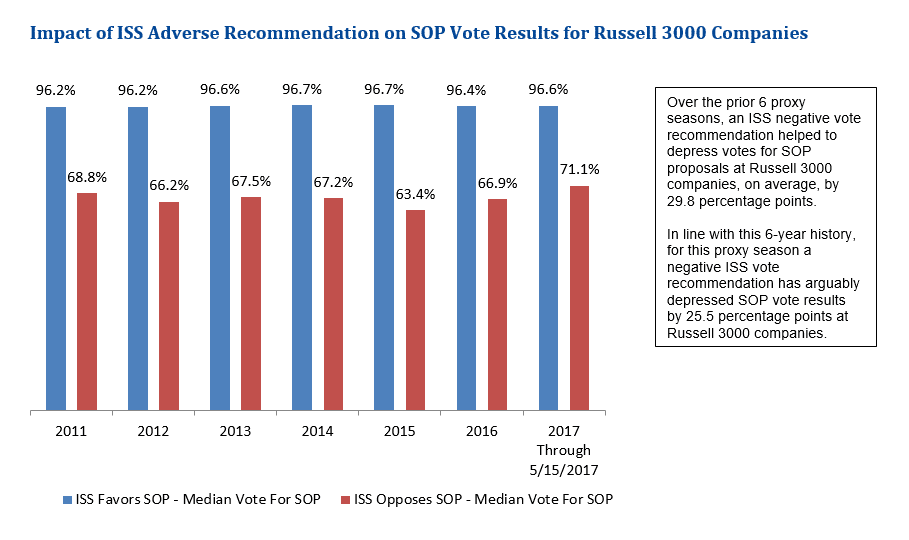 For Russell 3000 companies, ISS uses the following two-part analysis to assess the relationship between CEO pay and company performance:

If ISS finds that a pay-for-performance misalignment exists at a company (and which is not sufficiently mitigated by the factors assessed under the Qualitative Analysis), ISS will likely recommend that shareholders vote AGAINST such company’s SOP proposal.

Meridian reviewed the 2017 ISS proxy research reports on 185 Russell 3000 companies and found that the FPA did not impact ISS’s vote recommendation on any company’s say on pay proposal.

ISS may be using 2017 FPA scores to develop a new quantitative pay-for-performance test for 2018, as ISS is expected to incorporate financial metrics other than TSR into its Quantitative Analysis at that time.

As an increasing number of large cap companies have adopted proxy access, the number of shareholder proposals seeking proxy access this proxy season has seen a substantial decline from 2016 levels. Shareholder support for “3 + 3” proxy access proposals (i.e., those requiring 3% ownership for three years) has been strong.

This year, shareholders are also voting on proposals to amend proxy access bylaws to include provisions that broaden the right to proxy access. None of the 12 proposals voted on thus far have received majority support.

Prevalence and Status of Management Proxy Access Proposals in 2017

Prevalence and Status of Shareholder Proposals on Corporate Governance

The chart below provides a comparative summary of 2016 and 2017 shareholder proposals on key corporate governance matters.

Prevalence and Status of Shareholder Proposals on Executive Pay

The chart below provides a comparative summary of 2016 and 2017 shareholder proposals on executive pay matters.

As we expected, the prevalence of proposals on gender pay gap reporting has increased in 2017. In contrast, other compensation-related shareholder proposals have markedly declined in prevalence, including proposals to: (i) prohibit vesting of equity awards solely upon a change in control and (ii) impose stock retention or holding requirements.

Note: Each of the approved shareholder proposals is only advisory and non-binding on management.