Posted by Donald Kalfen on December 28, 2021 in Client Alerts 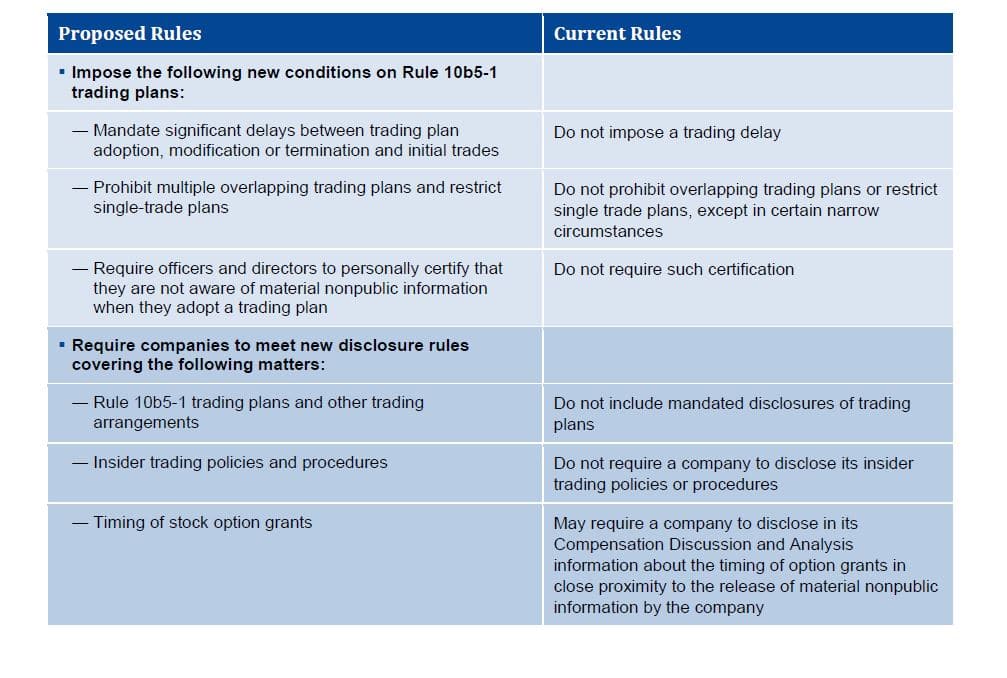 Meridian comment. The SEC is under no obligation to adopt a final rule within a specified period following the conclusion of the comment period. However, the SEC is not likely to drag its feet on the proposed rules given SEC Chair Gary Gensler’s previously stated interest in this area (see Meridian Client Update dated June 18, 2021). We anticipate that the SEC is likely to adopt final rules on both Rule 10b5-1 trading plans and share repurchases in the near-term. Companies should start reviewing the design of 10b5-1 plans adopted by executives and directors, as well as their insider trading policies and procedures.

The proposed rules are summarized below.

Rule 10b-5 prohibits securities fraud, including insider trading through the purchase or sale of securities on the basis of material nonpublic information. Rule 10b5-1, which was adopted in 2000,
allows insiders (e.g., officers and board members) to transact in their company’s securities by establishing prearranged trading plans. Rule 10b5-1 trading plans provide an affirmative defense to insider trading allegations if the plan is entered into: (i) in good faith; (ii) while the individual or public company is unaware of any material nonpublic information; (iii) with specifications regarding the number of securities, price and date of future transactions or a formula for making such determinations; and (iv) with prohibitions on exercising any subsequent influence over any person executing the plan.

Rule 10b5-1 provides an affirmative defense designed to demonstrate that a purchase or sale was not made “on the basis of” material nonpublic information. The rule provides a safe harbor for “insiders” (i.e., executives and directors) who are buying or selling company stock, as well as public companies that repurchase shares through buyback programs, to make trades during periods where they are aware of material nonpublic information or during “black-out” periods during which trading is otherwise prohibited. As a result, many executives have adopted Rule 10b5-1 trading plans that govern the sale of their
company securities.

When properly administered, Rule 10b5-1 trading plans benefit both executives and companies by reducing the risk of litigation alleging insider trading, making it easier for companies to administer their stock programs, and, perhaps most importantly, allowing executives to diversify their assets while not sending unintended signals to the market.

The SEC’s proposed amendments to Rule 10b5-1, if adopted, would impose the following new conditions on trading plans:

■ Require officers and directors to personally certify that they are not aware of material nonpublic information about their company when they adopt a trading plan.

These proposed rule amendments are described below. 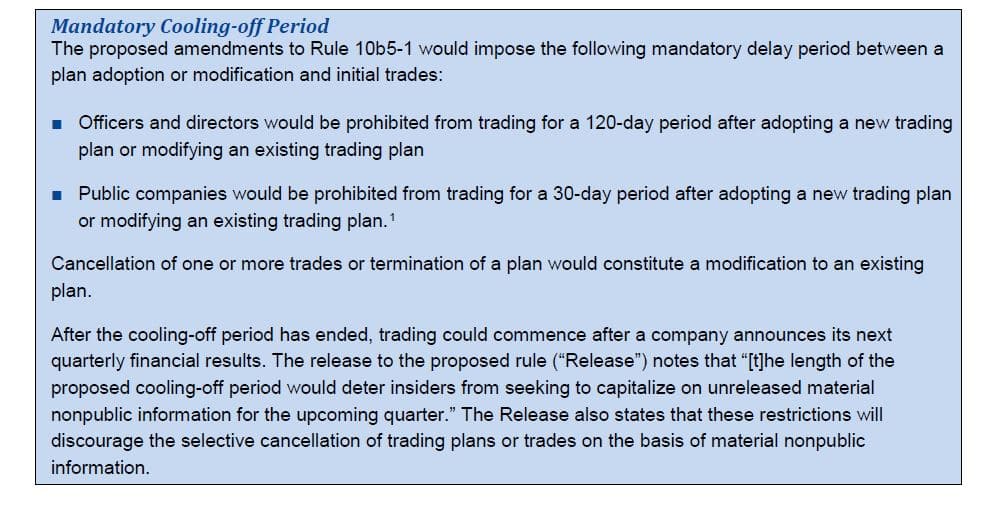 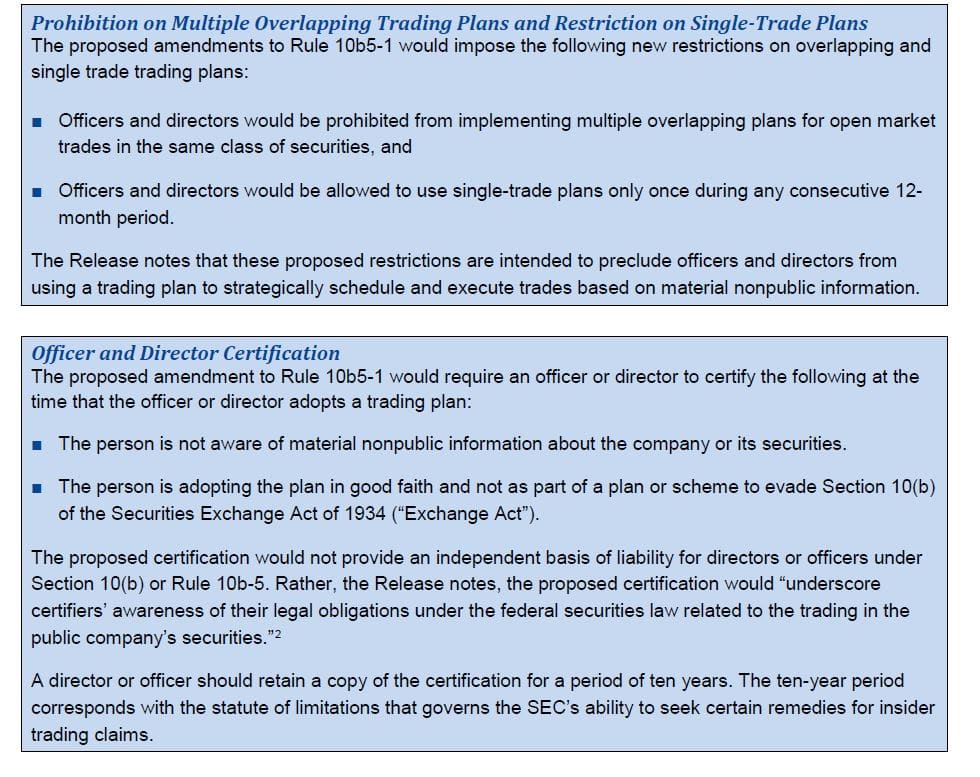 The proposed rules would require companies to disclose information about the following items:

■ Rule 10b5-1 trading plans and other trading arrangements. 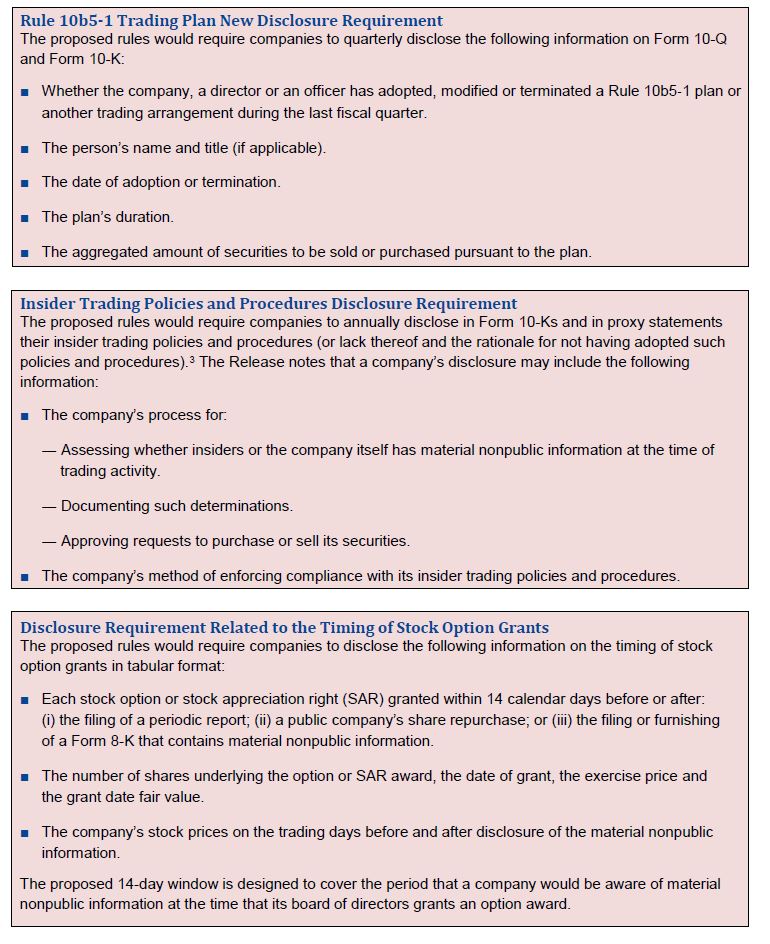 On December 15, 2021, the SEC issued proposed rules that would update the disclosure requirements on share buybacks by public companies.

The proposed rules would require a company to disclose the following information regarding repurchases of a public company’s equity securities:

■ Daily repurchases on a new Form SR, which would be furnished to the Commission one business day after execution of a public company’s share repurchase order; and

■ Additional detail regarding the structure of a public company’s repurchase program and its share repurchases. 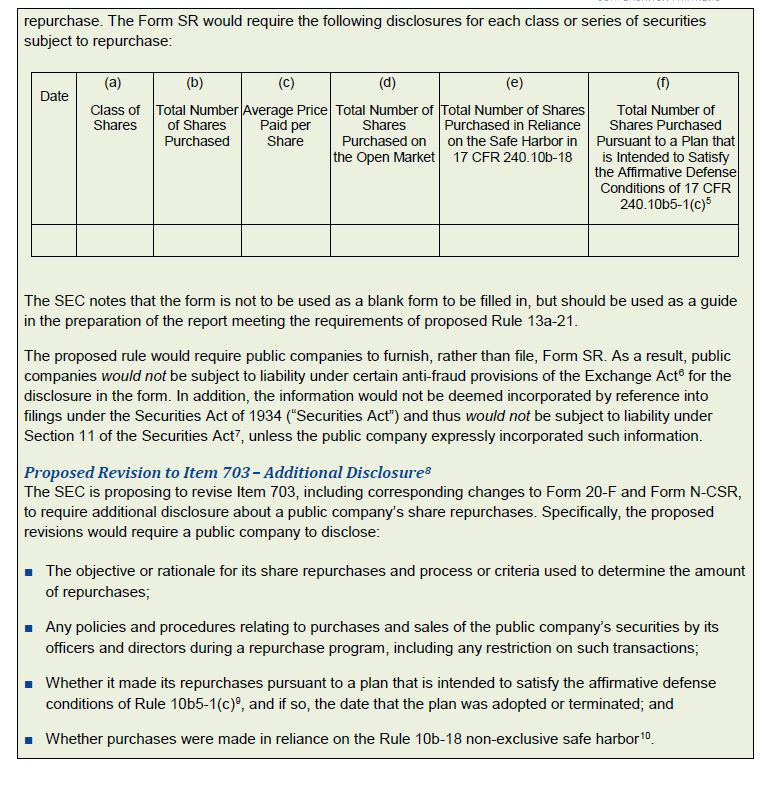 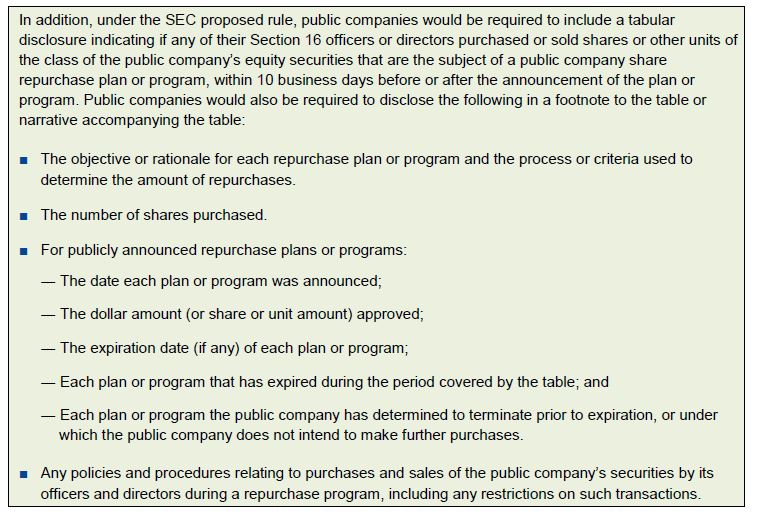 ¹ Public companies use 10b5-1 trading plans when  repurchasing their shares through open market purchases, tender offers, private negotiated transactions, and accelerated share repurchases.
² To prevail in a securities fraud claim under Section 10(b) of the Exchange Act, a plaintiff must allege and prove that the defendant acted with knowledge of wrongdoing. A false certification would be evidence that an officer or director acted with such intent.
³ Foreign private issuers would be required to disclose their insider trading policies and procedures on Form 20-F.
4 Emerging growth companies and smaller reporting companies would be required to include the disclosures on the timing of stock option grants in their proxy statements, even though they are subject to scaled executive compensation disclosures.
5 Column f of the proposed table refers to the safe harbor from liability for share repurchases by an issuer under a Rule 10b5-1 trading plan.
6 Specifically, Section 18 of the Exchange Act, which imposes liability on any person who shall make or cause to be made any false and misleading statement of material fact in any application, report, or document filed under the Act.
7 Sections 11(a) and (b) of the Securities Act provide for strict liability for issuers who make material misstatements or omissions in the issuance of securities.
8 The SEC is also proposing clarifying amendments to Item 703, Form 20-F and Form N-CSR to simplify application of the rules and remove unnecessary instructions.
9 Rule 10b5-1(c) provides a safe harbor from liability for trades made under a Rule 10b5-1 trading plan.
10 Rule 10b-18 provides an issuer a safe harbor from liability under certain market manipulation rules and Exchange Act Rule 10b-5 when repurchases of the issuer’s common stock satisfy the rule’s conditions.