Posted by Donald Kalfen on May 2, 2018 in Client Alerts

Under the proposal, a public company’s compensation ratio would describe the relationship between

■ the median compensation of all U.S.-based employees, including those workers contracted from a third-party (for this purpose, an employee’s compensation would be based on Social Security wages).

It is unclear why the proposed legislation bases the compensation ratio on COO compensation (instead of CEO compensation), since a public company is not required to disclose the COO position it its proxy and many companies do not employ COOs. It is possible this reflects a drafting error rather than the actual intent of the legislation.

The chart below shows the proposed corporate income tax rate by compensation ratio:

For passage, two-thirds of the California Senate and Assembly must approve the legislation. If enacted, the proposed legislation would be effective for taxable years beginning on and after January 1, 2019. 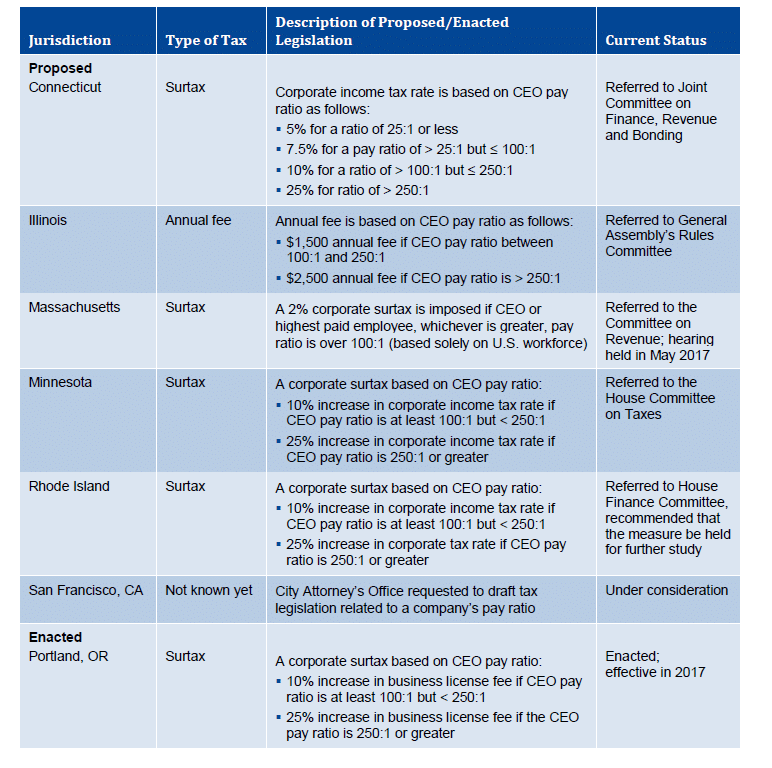 Meridian Comment. The recent disclosures of CEO pay ratios has neither caused a flood of new jurisdictions proposing taxes linked to a company’s CEO pay ratio nor any meaningful movement on outstanding legislative proposals. We believe this reflects the largely symbolic nature of these tax proposals, which do not appear to have broad-based legislative support. In fact, the California proposal is the third attempt to pass such legislation in that jurisdiction. At this juncture, we would be surprised if any of these proposals were enacted.