Posted by Donald Kalfen on September 23, 2019 in Client Alerts

Each year, Institutional Shareholder Services (ISS) surveys institutional investors, public companies (“issuers”) and the consulting and legal communities on emerging corporate governance and executive compensation issues as part of its annual policy formulation process (the “Survey”). Issuers and their advisors are collectively referred to as “non-investors” in this Client Update. Possibly reflecting concerns about the influence of ISS policies, 57% of this year’s survey respondents were issuers, while only 32% of respondents were investors, primarily large institutional shareholders.

■ Starting in 2020, ISS will incorporate Economic Value Added (EVA) metrics (in lieu of currently provided GAAP metrics) into the relative Financial Performance Analysis (“FPA”) component of its quantitative pay-for-performance test for U.S. and Canadian companies. However, directly in response to both investor (84%) and non-investor (71%) preferences, ISS appears likely to continue to show GAAP metrics in its proxy research reports, in addition to the new EVA metrics to be included in the FPA.

■ Starting in 2020, ISS will generally recommend AGAINST the nominating committee chair (or other members of the committee on a case-by-case basis) if a company does not have any female directors serving on its board of directors, absent mitigating factors (see below for detailed list of mitigating factors). Given the rough split in investor preference regarding the inclusion of other mitigating factors, ISS appears unlikely to alter the current status quo.

■ A plurality of investors believe that ISS should modify its policy on director overboarding by reducing the number of corporate boards on which a director may sit. Given overall governance concerns around overboarding and stated investor preferences, ISS appears likely to adopt the following revised overboarding policy for 2020.

■ Currently, ISS considers a number of factors when evaluating the merits of shareholder proposals calling for an independent Board Chair. An overwhelming majority of investors believe that ISS should expand these factors to include up to seven additional factors that strongly suggest the need for separating the CEO and Board Chair roles.

ISS conducted this year’s Survey to obtain feedback on a wide range of questions, including issues related to ISS’s quantitative pay-for-performance assessment methodology, gender diversity on boards, director overboarding, and shareholder proposals seeking to separate the Board Chair and CEO roles. Each of these topics is discussed below.

In its Survey report, ISS states that it “plans to incorporate EVA metrics into the [FPA] for U.S. and Canadian pay-for-performance assessments [starting in] 2020,” in place of the currently used GAAP metrics.1 ISS notes that four EVA metrics will be used in the FPA’s comparison of a subject company’s long-term financial performance relative to an ISS-developed peer group and that the basic operation of the FPA will not change.

The Survey asked respondents to describe their views on whether ISS should continue to display the GAAP metrics as a point of comparison to the FPA assessment with EVA metrics.

As shown in the below table, the vast majority of both investors (84%) and non-investors (71%) believe that ISS should include GAAP-based metrics in its proxy research reports as a point of comparison to the FPA assessment with EVA metrics. A significant minority of non-investors (20%) provided “other” responses, mainly indicating concerns regarding the use of EVA metrics in the FPA. Some of those investors suggested that ISS use metrics other than GAAP and EVA metrics as part of the FPA.

Meridian Comment. Investor preference for ISS to continue to include GAAP-based metrics in proxy research reports may signal some degree of investor ambivalence (or reticence) toward ISS’s primary use of EVA metrics. Nonetheless, since ISS will incorporate EVA metrics into the FPA starting in the 2020 proxy season, companies should monitor the results of that component of the ISS quantitative pay-for-performance assessment. Some companies may challenge ISS’s pay-for-performance determinations if EVA metrics and GAAP-based metrics yield conflicting conclusions regarding relative performance. As we have previously noted, EVA metrics may provide an inappropriate framework for comparing performance for some industry sectors (e.g., financial services).

Starting in 2020, ISS will generally recommend AGAINST the nominating committee chair (or other members of the committee on a case-by-case basis) if a company does not have any female directors serving on its board of directors, absent mitigating factors. This policy is applicable to component companies of the Russell 3000 and S&P 1500 indices.

ISS will consider the following mitigating factors prior to issuing a negative vote recommendation:

■ A firm commitment, as stated in the company’s proxy statement, to appoint at least one woman to the board in the near term, such as within the next year.

■ The presence of at least one woman on the board at the time of the preceding annual meeting.

■ Other relevant mitigating factors on a case-by-case basis, if applicable.

The Survey asked respondents whether any other mitigating factors would be sufficient to warrant a positive ISS vote recommendation despite the lack of at least one woman director on a company’s board.

As shown in the below table, a slight majority of investors (54%) and strong majority of non-investors (73%) indicated that other mitigating factors are relevant to consider in determining the level of concern regarding the lack of at least one woman director on a company’s board. However, a strong minority of investors (46%) indicated that no factors (other than the ones already incorporated into ISS policy) are sufficient to mitigate concerns regarding the lack of female representation on a board.

The following chart summarizes investor and non-investor responses regarding which factors are most relevant to warrant a positive ISS vote recommendation despite the lack of female representation on a board.

Meridian Comment. Given the rough split in investor preference, ISS appears unlikely to include additional mitigating factors in its Board gender diversity proxy voting policy.

Under ISS’s current policy on director overboarding, ISS will recommend shareholders vote against a director who serves on an excessive number of boards as described in the below table:

The Survey asked respondents to describe their views on whether ISS should change its policy on director overboarding.

The following chart summarizes investor and non-investor responses regarding what constitutes an acceptable number of directorships for directors who are active CEOs.

Meridian Comment. ISS appears likely to adopt a more stringent standard on overboarding to align with the evolving views of institutional shareholders. As ISS and major institutional shareholders adopt more stringent overboarding policies, directors will likely be pressured to limit their board service and companies will likely need to establish effective board refreshment policies in an increasingly competitive recruiting market.

Shareholder Proposals Seeking to Separate the Board Chair and CEO Roles

Under its current policy, ISS generally supports shareholder proposals seeking to separate the roles of Board Chair and CEO after taking into account a number of factors2 that strongly suggest the need for such separation of roles. The Survey asked respondents to describe their views as to whether ISS should consider additional factors when evaluating such shareholder proposals.

As the below table shows, investors and non-investors diverge on the factors or circumstances that most strongly suggest the need for an independent Board Chair when evaluating a shareholder proposal that requests that the position of Board Chair be filled by an independent director. The most common factor selected by investors (86%) was “poor responsiveness to shareholder concerns”. In contrast, the most common factor selected by non-investors (57%) was “a weak or poorly defined lead director role.” 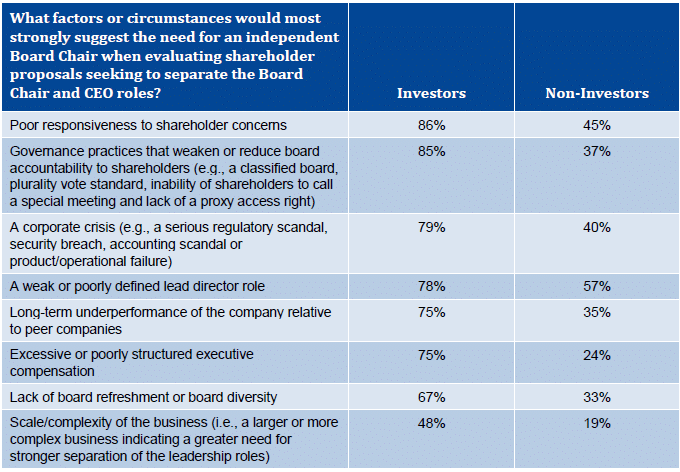 1 Currently, ISS’s pay-for-performance evaluation for Russell 3000 and Toronto Stock Exchange listed companies includes a three-part quantitative analysis which compares CEO total pay and company performance, as measured in absolute and relative terms to an ISS-constructed peer group. A company that receives either a “Cautionary Low” or a “Medium” level of concern under the initial quantitative analysis will be subject to the FPA, which will determine the degree to which ISS will scrutinize the company under its qualitative pay-for-performance assessment. For purposes of the FPA in its current form, ISS measures financial performance based on the three-year weighted average of three or four GAAP-based financial metrics.

2 Under its current policy, in determining whether to support a shareholder proposal seeking to separate the Board Chair and CEO roles, ISS considers the scope of the proposal, the company’s current board leadership structure, the company’s governance structure and practices, company performance and any other relevant factors that may be applicable.