Posted by Donald Kalfen on August 3, 2022 in Client Alerts

On July 13, 2022, the Securities Exchange Commission (“SEC”) proposed new rules on allowable exclusions of shareholder proposals from a company’s proxy.

Rule 14a-8 requires companies that are subject to the federal proxy rules to include shareholder proposals in their proxy statements to shareholders, subject to certain procedural and substantive requirements. The rule is intended to facilitate shareholders’ rights under state law to present their own proposals at a company’s meeting of shareholders and the ability of all shareholders to consider and vote on such proposals.

Proposed Amendment to Rule 14a-8

The SEC is proposing to modify the following three Exclusions:

■ The duplication exclusion, and

The SEC notes that, in the aggregate, the above three exclusions represent a significant percentage of the no action requests the SEC staff has received under Rule 14a-8. Companies often seek to exclude a particular shareholder proposal on several bases and may argue in the alternative.

In the release to the proposed amendment, the SEC claims that the modifications will:

■ Provide greater certainty and transparency to shareholders and companies as they evaluate whether an Exclusion applies to a particular proposal, and

■ Facilitate communication between shareholders and companies on important issues.

The comment period for the proposed amendments ends on September 12, 2022.

The proposed amendments would revise the substantial implementation, duplication and resubmission bases for excluding shareholder proposals, in the following respects: 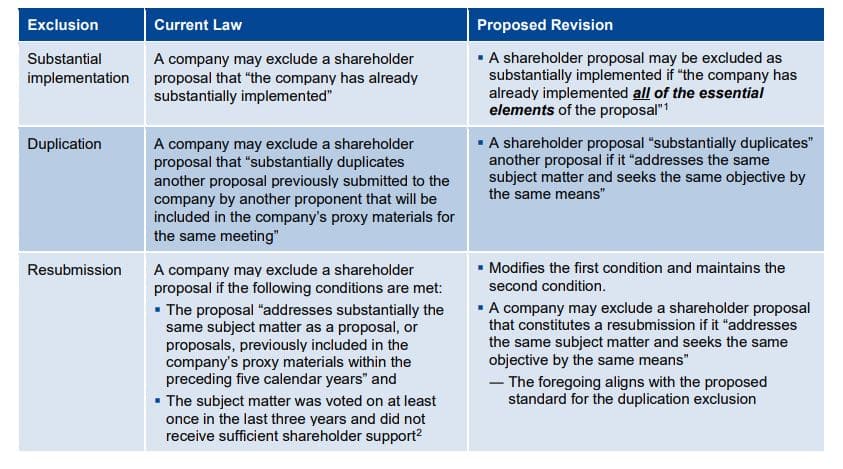 Meridian comment. The proposed rules were approved by a 3 to 2 vote of the SEC’s Commissioners, with the three Democratic Commissioners reversing course from prior SEC actions.

In her statement in opposition to the proposed rule, Republican Commissioner Hester Peirce noted that, only two years ago, the SEC had adopted the last amendments to Rule 14a-8 recalibrating the balance between allowing shareholder proposals to be included in a company’s proxy materials against “the reality that consideration of such proposals consumes company and shareholder resources.” Ms. Peirce said she could not support a proposal that would “upset that careful calibration by narrowing companies’ ability to exclude proposals that they have substantially implemented, are duplicative of other proposals, or are resubmissions of prior failed proposals.” Similarly, Republican Commissioner Mark Uyeda stated that the proposed rules would “effectively nullify the 2020 amendments to the resubmission exclusion and render this basis almost meaningless.”

The proposed rules may result in an increase in the number of shareholder proposals included in company proxy materials, which would result in companies diverting additional resources to respond to these proposals.

¹ The SEC notes in its proposed rule release that the proposed new standard “would still require a degree of substantive analysis – a determination of which elements of the proposal are the ‘essential elements’ and an analysis of whether those elements have been addressed.” A company would be permitted to exclude a proposal it has not implemented precisely as requested as long as the differences between the proposal and the company’s actions are not essential to the proposal.

² In 2020, the SEC amended the threshold levels of shareholder support that must be received in order for a company to exclude a proposal on the basis of the Resubmission Exclusion (see https://www.sec.gov/rules/final/2020/34-89964.pdf). A shareholder proposal would be considered as not receiving sufficient shareholder support if the proposal did not receive at least: