The guidance clarifies the application of ISS’s policies on certain governance matters, including the following: (i) racial/ethnic board diversity, (ii) director overboarding, (iii) shareholder proposals seeking an independent Board Chair and (iv) shareholder proposals related to a company’s gender, racial and/or ethnic pay gap. The following is a summary of the guidance on each of the above matters.

ISS Policy. Effective for the 2022 proxy season (i.e., meetings held on or after February 1, 2022), ISS will generally recommend AGAINST the nominating committee chair (or other directors on a case-by-case basis) if a company does not have any apparent racial or ethnic minorities serving on its board of directors, absent mitigating factors. This policy is applicable to component companies of the Russell 3000 and S&P 1500 indices. New Guidance. The guidance clarifies that ISS will recommend voting “against” a nominating chair of an insufficiently “diverse” board1 – even if that director is from an underrepresented group – because the ISS voting recommendation is intended to convey dissatisfaction with the person’s action taken in that role, rather than as a call for the person to resign from the board.

Sources for Determining a Director’s Racial and Ethnic Characteristics

ISS’s guidance specifies the sources that ISS will use to determine a director’s racial and ethnic characteristics, including the voluntary disclosures and other sources described below.

ISS’s guidance defines the racial/ethnic categories that ISS will use to determine the racial and ethnic characteristics of directors. 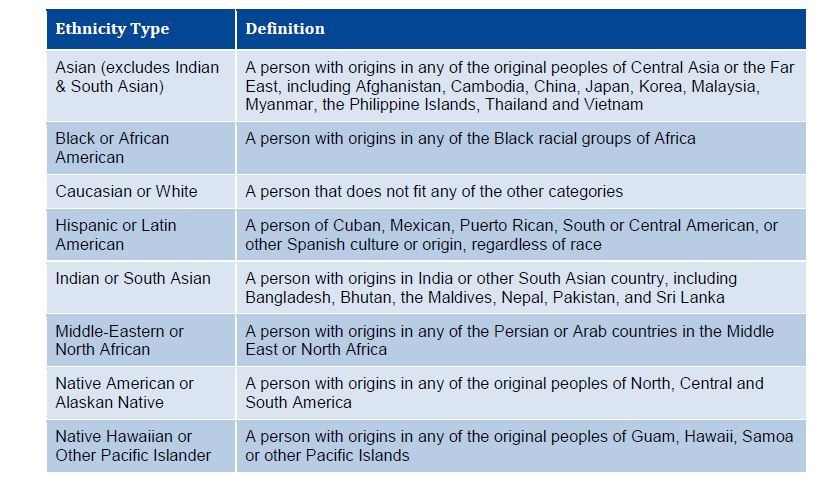 ISS Policy. ISS will generally recommend voting AGAINST or WITHHOLD from a director based on his or her number of directorships under the following circumstances:

■ A director who does not serve as CEO of a public company if he or she serves on a total of more than five public company boards (“Overboarding Policy”).

New Guidance. As described below, ISS clarifies how special purpose acquisition companies (SPACs) are counted for purposes of the Overboarding Policy.

■ CEOs of SPACs. CEOs of a SPAC will be treated as a public company CEO for purposes of the Overboarding Policy. ISS notes that service as CEO of a SPAC is a time-consuming job, in which the CEO is responsible to find a suitable target and consummate a transaction within a limited time period.

■ Directors of SPACs. ISS will generally count each directorship on a SPAC board in determining the total number of boards on which an individual serves.

ISS Policy. Under extraordinary circumstances, ISS will recommend a vote AGAINST or WITHHOLD from directors individually, committee members or the entire board due to:

■ Material failures of governance, stewardship, risk oversight or fiduciary responsibilities at the company,

■ Failure to replace management as appropriate, or

■ Egregious actions related to a director’s service on other boards that raise substantial doubt about his or her ability to effectively oversee management and serve the best interests of shareholders at any company.

ISS’s non-exhaustive list of examples of “risk oversight” that may lead to an ISS negative vote recommendation on incumbent board members includes a board’s “demonstrably poor risk oversight of environmental and social issues”. However, ISS does not define or identify environmental and social risks, other than climate-related risks, that fall within the scope of the policy.

New Guidance. The guidance clarifies that a “demonstrably poor risk oversight of environmental and social issues” includes the following circumstances:
■ A regulator has issued significant findings against the company, or

■ Egregious actions related to the director’s board service raise substantial doubt about his or her ability to effectively oversee management and serve the best interests of shareholders.

ISS will identify the presence of such egregious actions based on any well-supported shareholder campaign, a controversy, or a clear mismatch between a company’s future planning and industry norms that threaten to put the company at a competitive disadvantage. ISS will undertake its own analysis and will not uncritically rely on any single third-party source of information.

■ The company’s disclosure regarding gender, race or ethnicity pay gap policies or initiatives compared to its industry peers.

■ Whether the company has been the subject of recent controversy, litigation, or regulatory actions related to gender, race, or ethnicity pay gap issues, and

■ Local laws regarding categorization of race and/or ethnicity and definitions of ethnic and/or racial minorities.

■ Whether the company is actively trying to improve the representation of women and people of color and people from different ethnic backgrounds in senior leadership and technical positions and whether it is making progress in these efforts.

■ The effectiveness of a company’s diversity and inclusion initiatives compared to its industry peers.

■ Information reported by U.S. companies operating in the United Kingdom (UK) in response to the UK requirement that companies that employ more than a certain number of people in the UK disclose the pay gap between the median male and female employees and the percentage of men and women in pay quartiles.

■ Whether a company has any related significant controversies that could result in reputational risks.

ISS will generally recommend voting FOR a pay gap shareholder proposal if it determines that a company is lagging in its efforts to improve the median pay gap or there are significant controversies.

ISS will generally recommend voting AGAINST proposals that request a global median race or ethnicity pay gap report, due to the fact that types of racial/ethnic disparities, issues of discrimination, and the racial/ethnic composition of underrepresented groups can be entirely different depending on the countries in which a given company operates. In its guidance, ISS notes that a global racial/ethnicity pay gap statistic may not be possible to produce and would not produce usable information to track how well the company is doing at offering all employees equal opportunity.