Posted by Donald Kalfen on August 20, 2021 in Client Alerts

Through its annual policy survey, ISS seeks feedback from institutional investors, public companies, corporate directors and the consulting and legal communities on emerging trends in corporate governance, executive compensation and other matters as part of its policy formulation process. The policy survey often provides an early read on ISS’s emerging views on a particular issue. 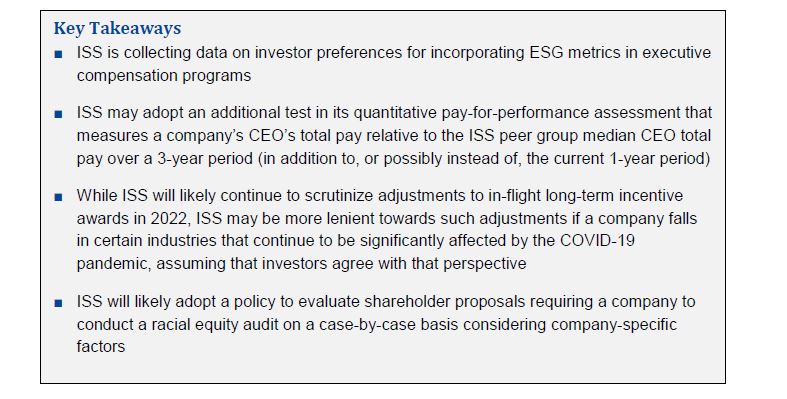 The Policy Survey will be open for participation until Friday, August 27. The Survey can be completed online by going to the following webpage: https://www.surveymonkey.com/r/ISS_2021_Primary_Benchmark_Survey.

The results of the Policy Survey are expected to be published in September. To provide ISS with a corporate perspective, we recommend that public companies complete and submit the Survey, and consider gathering input from Board members, as appropriate. Meridian will be submitting a response as well.

Currently, ISS does not have a policy on whether a company should include non-financial ESG metrics in their incentive programs for executive officers. ISS notes in the Survey “the upward trend of companies incorporating non-financial ESG-related metrics into compensation programs” and cites rationales in favor and against the inclusion of ESG metrics in incentive programs. Specifically, ISS notes that critics and sceptics are concerned that “many ESG outcomes may be hard to quantify and that the more widespread use of such performance metrics could reward executives for vague and poorly-defined outcomes that should already be considered part of the executive’s job.”

The Survey asks respondents to identify whether incorporating non-financial ESG metrics into executive compensation programs is an appropriate way to incentivize executives by choosing among the following responses:

The Survey also asks respondents to identify the pay components that are most appropriate for inclusion of non-financial ESG metrics if a company decides to use them by choosing among the following responses:

Meridian comment. While ISS appears to be collecting feedback on investor preferences regarding the recent trend of including ESG metrics in annual incentive plans, we do not expect ISS to adopt a prescriptive policy in this area at this time.

A component of ISS’s quantitative analysis is the Multiple of Median (MoM) analysis, which measures a CEO’s 1-year total pay relative to the ISS peer group median CEO total pay. Starting in 2020, ISS now includes in its proxy research reports a 3-year MoM of CEO pay solely for informational purposes. The 3- year MoM is a measure of long-term pay on a relative basis.

The Survey asks respondents to identify whether ISS’s quantitative pay-for-performance assessment should include a longer-term perspective (e.g., a 3-year assessment) of CEO pay amounts by choosing among the following responses:

Meridian Comment. ISS appears to be considering whether to adopt a 3-year MoM analysis as an additional test in its quantitative pay-for-performance assessment.

Currently, under ISS’s latest policy guidance related to the COVID-19 pandemic, ISS will generally view negatively any changes to in-flight long-term incentive (LTI) awards, particularly for companies that exhibit a quantitative pay-for-performance misalignment. ISS believes that long-term incentives should cover performance over multiple years and “should be designed to smooth performance over a long-term period and not be altered after the beginning of the cycle based on a short-term market shock.”

In its Policy Survey, ISS notes that some industries continue to incur severe negative economic impacts since the onset of the pandemic more than a year ago. The Survey asks respondents to identify their view on adjustments to in-flight long-term incentive awards for companies incurring long-term negative impacts of the COVID-19 pandemic by choosing among the following responses:

Meridian comment. We expect ISS to continue to scrutinize adjustments to in-flight long-term incentive awards in 2022. However, ISS appears to be considering whether to be more lenient towards such adjustments if a company continues to be significantly affected by the COVID-19 pandemic.

Currently, ISS does not have a policy on such shareholder proposals. However, ISS has adopted policies on analogous issues. For example, ISS will evaluate, on a case-by-case basis, shareholder proposals requesting that a company report on: (i) pay data by gender, race or ethnicity, or (ii) policies and goals to reduce any gender, race or ethnical pay gap.

The Survey asks respondents to identify their view on third-party racial equity audits by choosing among the following responses:

The Survey also asks the respondent to identify which of the following company-specific factors are relevant in indicating that a company would benefit from an independent racial equity audit: