The Basics of SPACs

Posted by Tina Murphy on April 21, 2021 in Thought Leadership

Have you heard your friends, colleagues or even the media discussing SPACs, but you aren’t quite sure what they are talking about? If so, you are definitely not alone! In this short blog post, we explain what a SPAC is, illustrate how popular they’ve become over the past few years and discuss some of the key differences between a SPAC merger and a traditional initial public offering (IPO).

What is a SPAC?

A SPAC, or Special Purpose Acquisition Company, is a vehicle for private companies to go public, and has become a popular alternative to the traditional IPO. In its purest form, a SPAC is not a customary company, but rather the potential of a company. SPAC founders, often called SPAC sponsors, are typically PE investors or former industry executives. They come together and provide the start-up capital for the SPAC. The SPAC then raises additional capital by going public and issuing SPAC units, which typically consist of a share of common stock and a fraction of a warrant (1/2 or 1/3). These units and the corresponding parts are all publicly traded.

After the SPAC goes public, the sponsors’ main goal is to find a private company (the target) to take public through an acquisition. When creating the SPAC, the sponsors often specify an industry in which they will look for the target company. This gives the SPAC’s shareholders a sense of what they are investing in. The SPAC then typically has two years to find a target company to acquire using the money raised from the investors. If the SPAC does not find a target within this timeframe, the SPAC dissolves and the capital is returned to investors (with interest).

On the other hand, if the SPAC finds a target and the acquisition is successfully completed, the combined entity becomes a traditional public company with a name and ticker symbol reflective of the post-merger business. The founders benefit from the acquisition through their stake in the new company, which is traditionally 20% of the common stock. The SPAC investors receive an equity interest in accordance with their capital contribution. And the new public company is treated the same as any other public company.

With the increase in SPAC activity over the past few years, one might think that SPACs are a new phenomenon. But that’s not the case. In fact, SPACs have been around since the early 1990s. So while SPACs are not new, they certainly have exploded in popularity over the past few years. A few of the most popular companies that became public via a SPAC merger include Virgin Galactic, DraftKings, Opendoor, Hostess, Nikola Corporation, Vivint Smart Home and AdaptHealth.

In 2020, 248 SPACs completed an initial public offering. 27 of those SPACs have completed an acquisition and taken a target public, while another 99 have announced an acquisition but are still finalizing details and waiting for the shareholder vote. In the first 3.5 months of 2021, 308 SPACs have completed an initial public offering and another 260 SPACs have filed for an IPO (https://spacinsider.com/stats/). If 2020 was the “Year of the SPAC,” then 2021 may be dubbed the “Year of the SPAC on Steroids.” 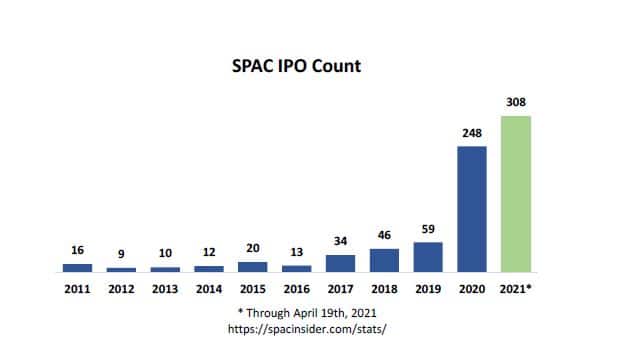 SPAC mergers are different from traditional IPOs in many ways, which may help explain their rise in popularity.

▪ Lower Cost: A typical SPAC involves a 2% underwriter fee and 3.5% fee at completion, compared to 7% for a traditional IPO.

▪ Information Dispersion: Since a SPAC transaction is technically M&A activity rather than an IPO, analysts can immediately provide information to potential investors about the transaction. This can increase interest in the deal and lead to a more stable valuation. Additionally, in a SPAC merger, private companies can present forward-looking projections for revenue and/or profitability. Publishing the strategic growth plan can also attract interest and support.

▪ Timeline: The timeline of a SPAC merger is usually 3 to 6 months (since a merger target must first be identified within the two-year time period) versus potentially up to a year for a traditional IPO. This accelerated timeline can be desirable for the private company as they can assume higher valuations, quickly obtain cash to sustain growth and better capture market sentiment.

Although this accelerated timeline can be exciting, it can also pose challenges. The new public company has to quickly set up the necessary compensation programs and policies to attract and retain executive talent. Most importantly, the new company will need to determine the treatment of outstanding equity awards and the size of the equity pool going forward. In addition, the company must also set up executive short- and long-term incentive plans and independent Board of Director pay programs that are on par with its public peers. These are all big decisions that must be made very quickly.

So, at the end of the day, are SPACs just a fad or are they here to stay? I think it’s safe to say that SPAC mergers will never fully replace traditional IPOs, as there isn’t a one-size-fits-all solution for any company. But the last few years have certainly proven that there can be multiple successful paths that a private company can take to go public. If SPACs continue to provide an ideal alternative vehicle to take a young and growing company public, then they will undoubtedly be around for a long time.