How and Why Pre-Commercial Biotech CEO Pay is Different – Part One: Tailoring Pay to the Business

Posted by Jim Heim on July 28, 2020 in Thought Leadership

2. The heightened influence of proxy advisory firms (“PAF’s”) such as ISS and Glass Lewis with respect to SOP votes; the voting guidelines of both firms are regularly disseminated and discussed in Compensation Committee meetings.

Consequent to the above, it is easier than ever to ascertain what constitutes an outlier program, and there can be real consequences when an outlier program design is coupled with a perceived pay-for-performance (“PFP”) misalignment:

• In situations where an outlier design appears to be overpaying, PAF’s are likely to recommend “against” SOP votes, placing companies in a penalty box where scrutiny of pay programs going forward is heightened and Committee members may be at risk of withhold votes.

• If the outlier design appears to be underpaying, bear in mind that executives have a better sense than past generations of what is typical (due to greater transparency of compensation programs). Such a misalignment may not immediately lead to challenges attracting and retaining talent, but it does create an untenable situation. It is no small thing to ask an executive for complete dedication when they know their pay model is not competitive.

With this as context, companies and sectors that appear to go against the grain in their pay program design merit attention. Pre-commercial biotechnology companies are an excellent example. There are lessons to be learned with respect to how this sector has implemented pay practices that differ from the broader market and the preferred model of PAF’s.

Part One: Tailoring Pay to the Business

Clinical trials proceed in a series of steps, or phases:

Treatments are typically in Phase I-III for a matter of years or even decades, and companies encounter a high degree of uncertainty with respect to whether a treatment will or will not advance to the next Phase. During this period, pre-commercial companies will most often rely on external financing to generate cash and fund what may be extremely expensive undertakings.

Consequently, the sector is characterized by:

• A great deal of uncertainty relating to likelihood and timing of progress through clinical trials;

• Need for significant cash generation from external financing until commercialization; 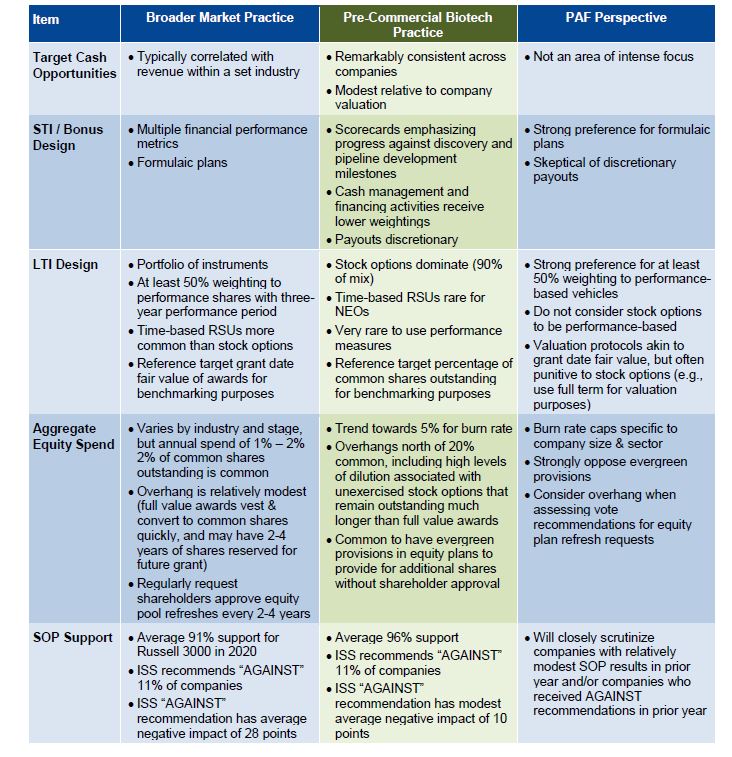 Once biotech companies transition to commercialization, the investor focus increasingly shifts to financial results, incentive plans follow suit and there is a clear evolution in pay practices to more closely approximate the pay model in other industries.

• Were NYSE or Nasdaq listed;

• Had annual meetings that included a SOP vote in the 12 month period ending June 1, 2020; and

• Had no CEO turnover in this period.

Ultimately, we identified 18 companies (listed in the Appendix) with key statistics including:

In the remainder of this report, we provide further detail relating to general pay practices, bonus/short-term incentive and long-term incentive design for CEOs, aggregate equity usage statistics and SOP support for the benchmark companies. 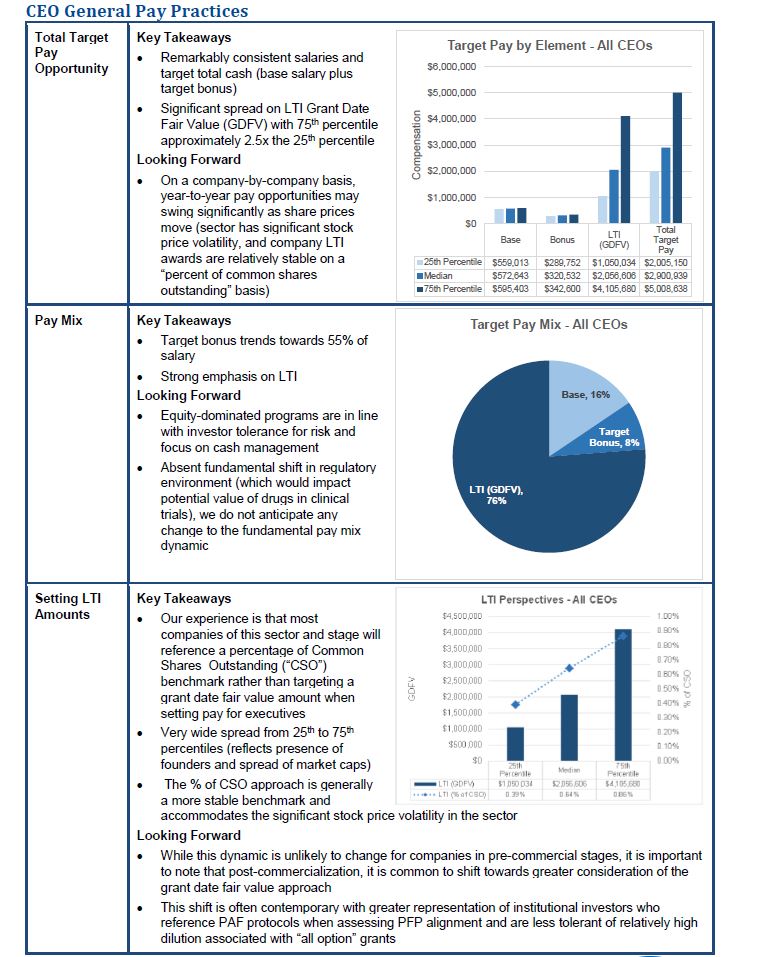 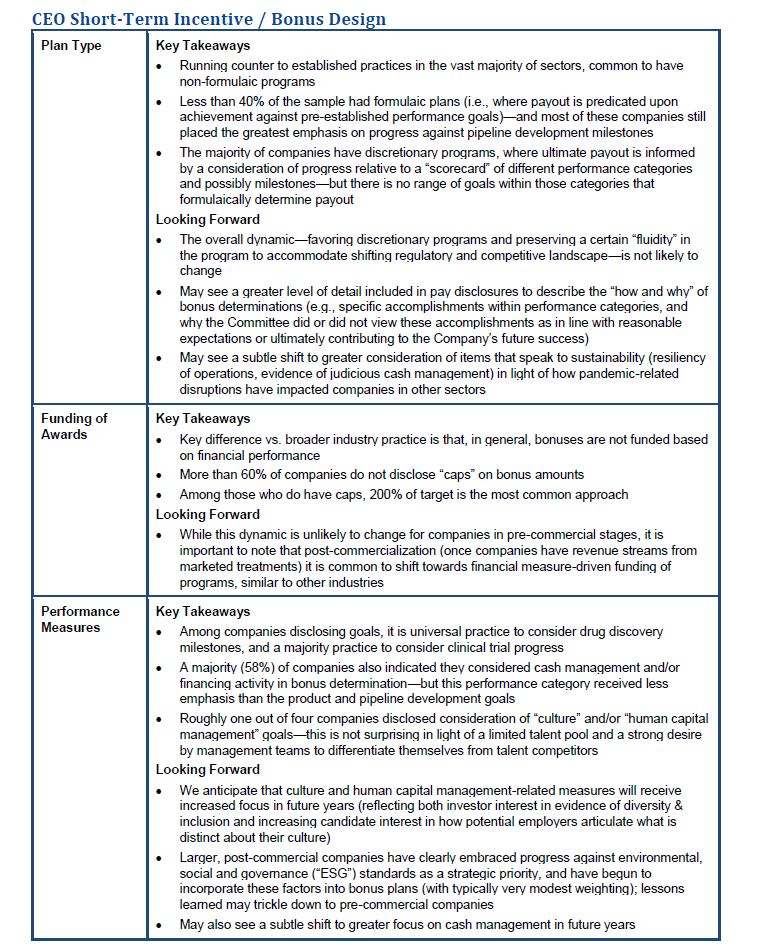 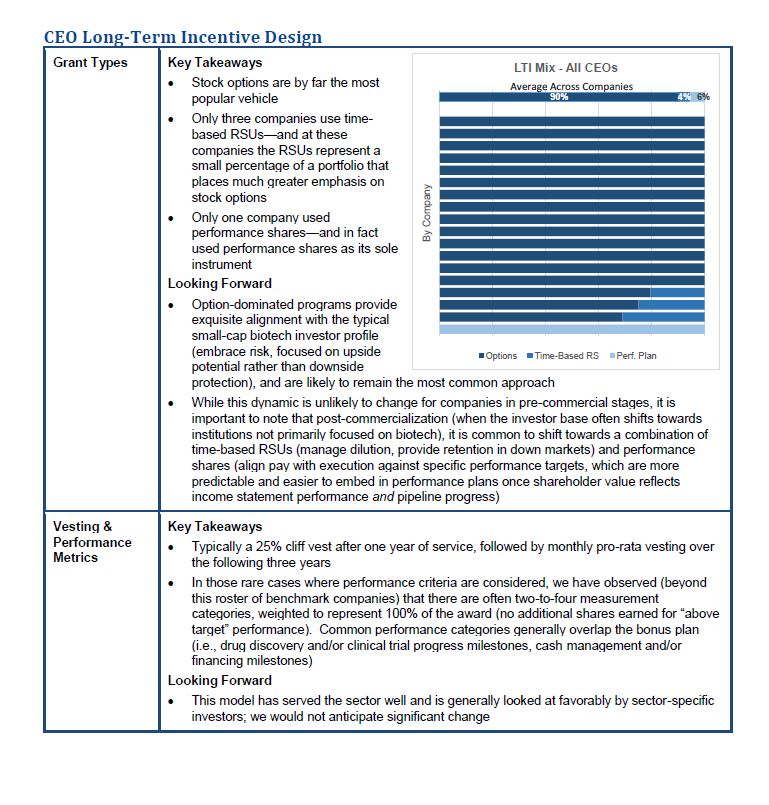 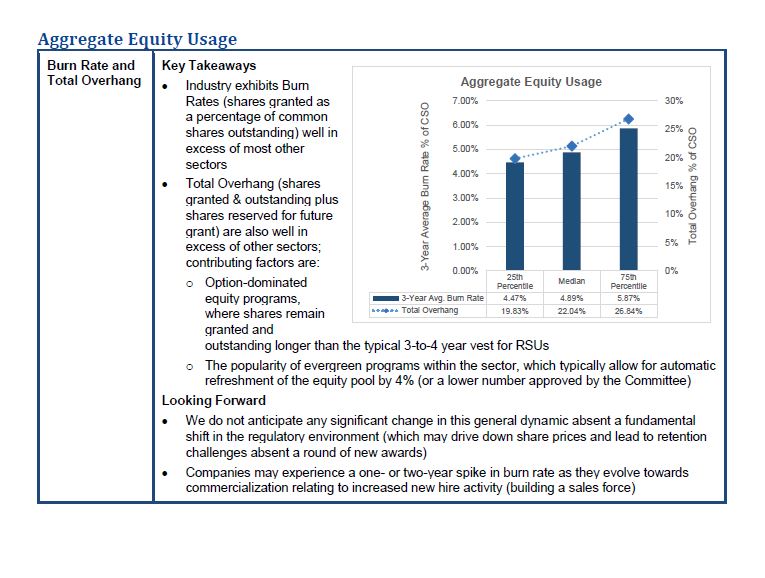 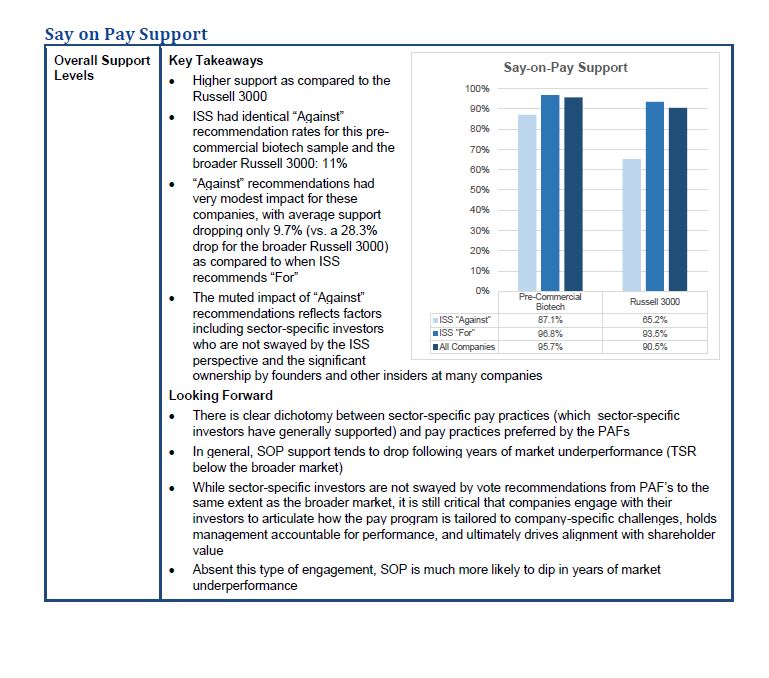